Swiss Avenue, at least the portions contained within the Swiss Avenue Historic District, was initially developed by Robert S. Munger, a Dallas cotton gin manufacturer and pioneering real estate developer, as part of a larger development, Munger Place, which was billed as the first deed-restricted community in Texas. Munger had retired from the management of his ginning companies and started working in real estate with his son Collett (for whom Dallas' Collett Avenue is named) in 1902. The subdivision was also one of the first in Dallas to ensure that the front views of homes wouldn't be blocked by utility poles; all utilities were installed through the rear of the lots via alleys. The lots in the Swiss Avenue section of Munger Place were larger than those in other areas of Munger Place, such as on Junius Street, Gaston Avenue, or portions of Worth Street that continue through Munger Place. In order to set off the development from others, Munger had gates erected at the entrances to Gaston Avenue, Swiss Avenue, and Junius Street, major thoroughfares in the development.

The original plat for Munger Place from 1907 showed twenty blocks of Swiss Avenue, Gaston Avenue, Junius Street, Worth Street, and Crutcher Street between Fitzhugh Avenue and Munger Boulevard platted; growth, however, was rapid and lots sold well, and munger extended the development in 1910 to include the south side of Live Oak Street from Fitzhugh Avenue to Dumas Street and both sides of Swiss Avenue to Parkmont Street.

Seventy-foot lots on Swiss Avenue were being sold for $3,500 in August 1908; by comparison, lots on Junius Street that were 60-foot lots were selling for $2,400 at the same time. In the 1978, shortly after the historic district was formed, 5744 Swiss Avenue was marketed for $275,000. Today, homes within the Swiss Avenue Historic District in good or well-remodeled condition routinely sell for over $1 million. Initially, Munger had set aside land for a private drive on the north side of Swiss Avenue, and a part to divide it from the public street on the south. The north side of the street was initially owned by residents, and both sides were intended for their private use. Today, the street and parkway is owned and maintained by the city of Dallas. Like most homes on Swiss Avenue, the community was deed restricted to white buyers only. An early deed to a lot on Swiss Avenue shows also that the front of residences were required to be set back not less than 60 feet nor more than 70 feet from the front line of the lot (the "setback"). Houses or quarters for renting were not allowed, but servant's quarters or stables for the use of the home's residents were allowed.

A trolley initially served the neighborhood, running through what is now the alley between Swiss and Gaston Avenues. Originally, Swiss Avenue was composed of two separate streets, one for public thoroughfare and one for private use, separated by a 40-foot park.

Dr. R. W. Baird is credited as being the first to build on Swiss Avenue in 1905 at 5303 Swiss. He constructed a Classical Revival mansion. In 1910 the surge of building along Swiss Avenue began and, of the approximately 200 homes on the street, the majority of them were constructed during the 1910s and the 1920s.

Swiss Avenue was originally named in 1857, well before serious development, by a Dallas resident from Switzerland. It started out as Swiss Boulevard. It was known as White Rock Road shortly after the Civil War when William H. Gaston purchased 400 acres along the road.

The deed restrictions Munger put in place required homes to be a least two stories in height, and constructed on the exterior of brick or masonry. Homes were not permitted to face side streets, and each home had to cost at least $10,000 to build. In other parts of Munger Place, the same $10,000 cost to build applied, but other portions of Munger Place, such as homes on Junius and Worth Streets running through Munger Place, were allowed to be made of wood-sided exteriors. 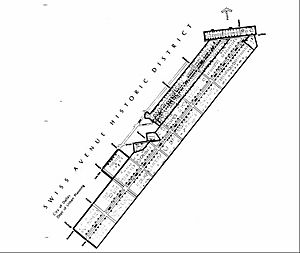 The entire district, Swiss Avenue between Fitzhugh and LaVista, was listed on the National Register of Historic Places on 28 March 1974 and is a Dallas Landmark District, also called a Historic District.[3] The historic district itself was the city of Dallas' first historic district in 1973. Swiss Avenue also boasts being the first paved street in the city of Dallas.

The Historic Preservation League of Dallas (a forerunner of the non-profit organization Preservation Dallas), with the help of the Dallas Department of Urban Planning, performed the original research for the designations. The National Trust for Historic Preservation initially became aware of the Dallas Preservation League's work through its Department of Field Services in the fall of 1972, and in January of the next year, the preservation league was awarded a $500 grant to retain an architectural historian to conduct an architectural survey of the proposed district. Another matching grant of $800 was provided later to assist the league in hiring legal assistance to challenge a proposal to build a high-rise apartment complex in the district.

According to the National Trust for Historic Preservation's study on the district's founding, getting the historic district ordinance passed was just one of many serious problems facing those seeking to preserve Swiss Avenue. Newspapers referred to the group as, "an unnamed group of interested citizens," which the Trust reports numbered only nine people. Two architects, an audiovisual expert, a freelance writer and journalist, a banker, contractor, and two lawyers were part of the initial group. Many absentee landlords of the Swiss Avenue homes felt that the value of the structures was only in the land, much of which was re-zoned for high-rise apartments.

Frank Lloyd Wright's influence is visible is seen in the R. W. Higginbotham House at 5002 Swiss built in 1913. It was designed Lang and Witchell.

Cristler-Rodgers House, 5750 Swiss Avenue: Recorded Texas Historic Landmark, 1989. This home was built in 1923 by Dr. J.H. Cristler. Cristler came to Dallas in 1911 after helping in the organization of Childress County, Texas. Starting in 1938, his daughter Edna and her husband, J. Woodall Rodgers, occupied the home from 1938. J. Woodall Rodgers was Mayor of Dallas from 1939 to 1947.

Robert and Marie Stubbs House, 6243 La Vista Drive. Recorded Texas Historic Landmark, 2001. This home was completed in 1926, and may have been designed by Dallas architect Otto H. Lang. The home was constructed by Robert Campbell Stubbs, who moved to Dallas in 1887 and started a paving business with his father. R.C. Stubbs' died a year after the home was completed and his wife, the former Marie M. Henke, lived there until 1940. The home was converted to apartments but converted back to single-family use in the 1970.

The Aldredge House, located at 5500 Swiss Avenue, owned by the Dallas Medical Society, was named to Preservation Dallas' 2015 list of “Most Endangered Historic Places.” This is because of an ongoing controversy relating to the zoning of the house allowing it to be used for private events, such as weddings. Preservation Dallas, in naming the house to its list, noted that the home is located in the city's first residential historic district, and is one of architect Hal Thomson's key works in the French Eclectic style featuring Renaissance detailing. Preservation Dallas noted that, while the home isn't threatened with demolition, the removal of the zoning allowing private events to be held at the home would likely mean the home would be required to be sold by its owners, thus closing off to the public historically intact interiors, and subjecting those to modernization.

In 2000, a controversy was created when former Texas Secretary of State David Dean requested to add a 400-foot extension on to his home, including space for a closet. The Dallas Landmark Commission refused to allow Dean to make the addition in August 2000. The Dallas City Council, on October 4, 2000, approved his request. Then-mayor Ron Kirk, later mayor Laura Miller, and Councilman John Loza opposed the request. Council members Leo Chaney, Jr., and Donna Blumer recused themselves from the votes citing unspecified conflicts stemming from their relationships with parties in the dispute. Dean, who later chaired the North Texas Crime Commission, served as counsel to Texas Governors William P. Clements, Jr., and Dolph Briscoe.

in 1973, the old Terrill Preparatory School home at 4217 Swiss had several mysterious fires, and was a "haven for hippies and transients," and some area residents wanted the house demolished. Also in 1973, a state district judge ordered the city to issue a building permit to a high-rise apartment builder wishing to construct apartments at Swiss Avenue and Collett Streets. The city had denied the permit, because of the expectation that the area was being made in to a historic district. The city appealed the case.

All content from Kiddle encyclopedia articles (including the article images and facts) can be freely used under Attribution-ShareAlike license, unless stated otherwise. Cite this article:
Swiss Avenue Historic District, Dallas Facts for Kids. Kiddle Encyclopedia.