Mayor of Dallas facts for kids

The Mayor of the City of Dallas is the head of government for the city. The current mayor is The Honorable Mike Rawlings, who has served as mayor for two consecutive terms since 2011 and is the 59th elected mayor to serve the position.

The Office of Mayor was created with the formation of the Dallas City Charter in 1856, also providing for the mayor six aldermen, a treasurer, recorder and a constable. In the charter, it was stated that each office would be elected for a term of one year. In the reorganization of 1876, the mayor was elected to the office for a term of two years. The office was first elected in the election of 1856, in which Dr. Samuel B. Pryor defeated A. D. Rice for the position. A. D. Rice would run for office again and go on to serve as the 4th mayor of the city.

For much of the 19th century, mayors of the city of Dallas only served as much as one term, even after the reorganization of 1876. This precedence was broken at the end of Winship C. Connor's term, who - after serving three consecutive terms from 1887 to 1894 - was the longest serving mayor of the city at the time. His success was accredited to the development of the city's first water, power, and streetcar systems.

Woodall Rodgers was mayor of Dallas from 1939 to 1947, with his tenure as mayor being one of the longest in the history of the city. He was mayor during World War II and ran during the rampant manufacturing of aircraft and weapon goods in a rapidly industrializing Dallas, along with the neighboring city of Fort Worth. At the time, Dallas Love Field was used as a joint USAAF base and training ground and saw expansion of its hub and runways at the end of the war to soon become the major jet-age airport of the city. He was also mayor when the Mercantile National Bank Building was constructed, which was the only highrise structure built in the United States during World War II and was the tallest building in the city of Dallas until the completion of Republic Center Tower I in 1954. The economic success contributed by his work in office is commemorated today by several namesakes throughout the city, most notably the Woodall Rodgers Freeway that passes underneath Klyde Warren Park and over the Trinity River along the Margaret Hunt Hill Bridge.

Earle Cabell served as 48th mayor from 1961 to 1964 and was mayor during the Assassination of John F. Kennedy.

The image of the city of Dallas was immensely tarnished by the assassination of the asdf President. Following Earle Cabell was Mayor J. Erik Jonsson who funded and supported the then proposed Dallas/Fort Worth International Airport. As mayor, he went on to support and open public works such as developing the new Dallas City Hall, the Dallas Convention Center, and the Dallas Central Library which is now named in his honor. He was followed by Wes Wise who went on to further improve the city's image during his term from 1971 to 1973. However, he stepped down to pursue a political career in United States Congress before the end of his term. His pro-term mayoral successor, Adlene Harrison, stepped in and became acting mayor for the remainder of his term. She was the city's first female mayor and the first female Jewish mayor in the United States. Although Dianne Feinstein is officially recognized as the first female Jewish mayor in the United States after her election in 1977, Adlene Harrison's position as acting mayor predates Feinstein's start in office by almost two years. Adlene began serving as acting mayor on February 11, 1976, while Feinstein began her first term on December 4, 1978. Adlene would go on to serve as a member of several environmental committees and organizations, including the Environmental Protection Agency. The city's second female mayor, Annette Strauss, coincidentally was also the city's second female Jewish mayor.

Ron Kirk was the first African-American mayor of the City of Dallas and served two terms from 1995 to 2002. As mayor, he led several efforts advocating for race equality and social welfare, mitigated tension between City Council and the controversial Dallas School Board, advocated for the development, and oversaw the construction of the American Airlines Center. He would later step down to pursue a seat in the US Senate, where he lost in the 2002 election to John Cornyn. After his defeat, he went on to become a lobbyist before being nominated and appointed by President Barack Obama to served as United States Trade Representative from 2009 to 2013. 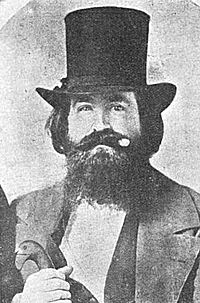 Samuel B. Pryor, the first mayor of Dallas. 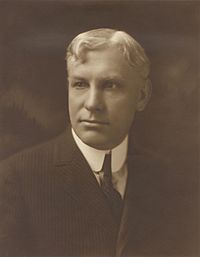 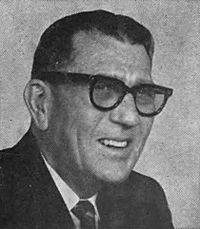 Earle Cabell, the mayor of Dallas at the time of President Kennedy's assassination. 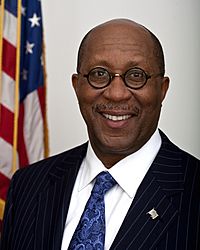 Ron Kirk, the first African-American mayor of Dallas and the former US Trade Representative.

The incumbent Mike Rawlings speaking at the WTTC Global Summit 2016 hosted in Dallas.

This is the list of people who have held the office of Mayor.

All content from Kiddle encyclopedia articles (including the article images and facts) can be freely used under Attribution-ShareAlike license, unless stated otherwise. Cite this article:
Mayor of Dallas Facts for Kids. Kiddle Encyclopedia.