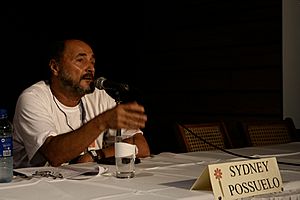 Sydney Possuelo started his career assisting the famous Villas Boas brothers with their work among indigenous peoples of the Xingu River area. Later he became the Director of the Department of Indigenous in Isolation (Departamento de Indios Isolados) at the FUNAI (National Indian Foundation of Brazil), doubling the surface size of officially designated Indigenous land in Brazil in only two years.

Working in the most isolated areas in the Amazon region, Possuelo has led many expeditions, getting in contact with isolated tribes in Brazil, with the aim to protect them from other threats. He was responsible, among others, for the restoration of peaceful contact with the Korubo Indians, who had previously killed some FUNAI officials.

For his many efforts Sydney has received many prizes, including honors from the National Geographic Society, Bartolomeu de las Casas in 1998, a gold medal from the Royal Geographical Society, the title of "Hero of the Planet" by Time Kids Magazine, as well as "Hero of the year" 2001 by United Nations.

In his 60 years of work, Brazilian-born Possuelo has made contact with seven tribes that had never previously been exposed to white people, was responsible for demarcating about 15 percent of Brazil’s territory as protected reserves for the indigenous communities, and afterward adopted an opposite – and revolutionary – policy of avoiding contact with those peoples, in order to protect them. With machete in hand and without an academic degree, he became an ethnographer and spent years in the jungles in the company of the native peoples.
For years Possuelo worked for and headed the Department for Isolated Indians in FUNAI, Brazil’s National Indian Bureau. His efforts have made him the foremost authority in the field, a spokesman for the indigenous tribes of the Amazon region and one of the most admired and decorated activists in the world. Without him, dozens of tribes would have become extinct.

Until January 24, 2006 he was head of the FUNAI Department of Unknown Tribes, a governmental bureau responsible for protecting the land and lifestyle of isolated tribes from encroaching settlers. Days earlier, he had criticized FUNAI director Mercio Pereira Gomes for suggesting that Brazilian Indians held too much land, comparing Gomes to "ranchers, land-grabbers, miners, and loggers." Soon afterwards, Possuelo was dismissed from his position.

Possuelo is still continuing his efforts at defending isolated tribes through the non-governmential Instituto Indigenista Interamericano.

Possuelo is the main protagonist in the book The Unconquered: In Search of the Amazon's Last Uncontacted Tribes (2011) by National Geographic writer Scott Wallace. It details a 76-day expedition in 2002 led by Possuelo to find the status of the "Arrow People", an uncontacted tribe in the Vale do Javari Indigenous Land.

All content from Kiddle encyclopedia articles (including the article images and facts) can be freely used under Attribution-ShareAlike license, unless stated otherwise. Cite this article:
Sydney Possuelo Facts for Kids. Kiddle Encyclopedia.