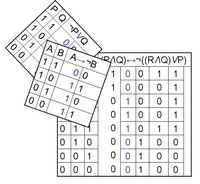 A table of information is a set of facts arranged in rows and columns. It is a way of displaying information. It requires a medium, such as writing or print on paper, or a computer monitor. It is both a mode of visual communication and also a way to set out data.

A table consists of an orderly arrangement of rows and columns. The columns and rows usually have names or labels. Tables may include notes, headers, footers or other features. Like other graphic forms such as diagrams and illustrations, tables are often used together with prose. In books and articles, tables are often given numbers and captions.

Tables were the first way to print social and scientific data, before any other kind of graphics like graphs and charts. All the information about a modern society was recorded and published first as tables. Marriage certificates were written tables. Census results were recorded as tables, and later analysed in printed tables. All weather observations were published as printed numerical tables. Many kinds of reports to Parliament contained tables of data. Many of these methods were invented in Britain, because the government collected statistics about the population, and then published the results.

The use of tables is widespread in all types of communication, research and data analysis. Tables appear in print media, handwritten notes, computer software, architectural ornamentation, traffic signs and many other places. The details vary according to circumstances. Tables are extremely flexible, and can easily be constructed on computer and in print.

Tables are not always easy to understand, and there is a whole industry which takes table information and turns it into other forms, such as graphs and charts, for the benefit of the reader.

All content from Kiddle encyclopedia articles (including the article images and facts) can be freely used under Attribution-ShareAlike license, unless stated otherwise. Cite this article:
Table (information) Facts for Kids. Kiddle Encyclopedia.