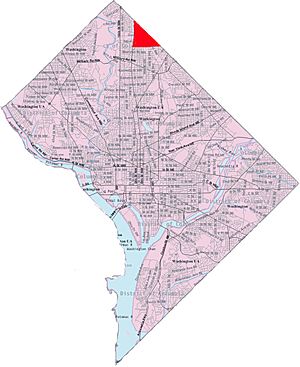 Map of Washington, D.C., with Takoma highlighted in red.

Takoma is a neighborhood in northern Washington, D.C.. It is located in Advisory Neighborhood Commission 4B, in the District's Fourth Ward, within the northwest quadrant. It borders the city of Takoma Park, Maryland. Takoma is a diverse neighborhood, populated mostly by middle-class families. Its small downtown has recently been re-developed, bringing in new residents and attractive new businesses. Many of the houses in Takoma are historic, with some over 100 years old.

Takoma and the rest of Ward 4 are represented in the Council of the District of Columbia by Brandon Todd.

Along Eastern Avenue, Takoma borders Takoma Park, Maryland, a city with which Takoma shares its origins. Takoma shares a common identity with the neighboring city in Maryland, and the downtown area surrounding the Takoma Metro station crosses the District of Columbia line.

The neighborhood's Takoma Recreation Center and Public Pool is one of several major recreation centers in D.C.

Takoma was originally developed in 1883 by developer Benjamin Franklin Gilbert as a commuter suburb on the Metropolitan Branch of the Baltimore and Ohio railroad line. Gilbert welcomed the Seventh-day Adventist Church to set up their world headquarters and publishing house in Takoma, DC with a hospital and college in neighboring Takoma Park, Maryland, and promoted the community's reputation for vegetarianism and "clean living" away from the "malarial swamps" of the city. Takoma, D.C. was originally regarded as the commercial hub for the entire surrounding area, prior to the development of Silver Spring, as it featured large shops and industrial buildings in the area now occupied by the Metro station.

Takoma was originally the name of Mount Rainier, from Lushootseed IPA: [təqʷúbəʔ] (earlier *təqʷúməʔ), 'snow-covered mountain'. In response to a wish of Gilbert to rename the train stop called "Brightwood," the name Takoma was chosen in 1883 by DC resident Ida Summy, who believed it to mean 'high up' or 'near heaven'.

The Seventh-day Adventist Church maintained its world headquarters and a publishing house on the Eastern Avenue side of the D.C. line until the early 1980s; after moving to Silver Spring, the former site of the publishing house became art lofts and rehearsal space for the Washington Opera.

The Takoma Theater, built in 1924, is located in the neighborhood. Takoma Theatre Conservancy, a nonprofit preservation group, is raising money to buy and refurbish the theater. The District of Columbia awarded a grant to the group to study how the theater would affect the residential neighborhood and how it should operate the theater if it reopened.

Both Takoma, D.C., and Takoma Park, Maryland, were noted regionally and nationally for progressive politics dating from the 1960s, when area residents (led by future Takoma Park, MD mayor Sam Abbott) rallied to prevent a 10-lane freeway from bisecting the community, and lobbied to build the Metrorail system, near the site of the former B&O railroad station around which the community had been built. However, much of the land adjacent to the station was demolished or neglected in the wake of the freeway controversy, creating division between downtown Takoma Park, MD and the center of the Takoma community, which roughly parallels the D.C. line. Both of the remaining areas, on either side of the D.C.-Maryland line, are now protected as U.S. Historic Districts.

District of Columbia Public Library operates the Takoma Park Neighborhood Library. It was the first neighborhood library in Washington, D.C. and a Carnegie library.

In addition to that, EF International Languages Center Washington D.C., a private English school for foreign students, is located in Takoma.

All content from Kiddle encyclopedia articles (including the article images and facts) can be freely used under Attribution-ShareAlike license, unless stated otherwise. Cite this article:
Takoma, Washington, D.C Facts for Kids. Kiddle Encyclopedia.