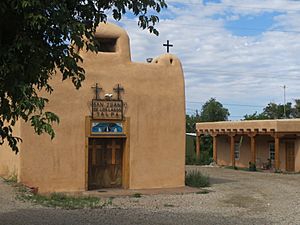 Talpa, New Mexico is a settlement in Taos County, New Mexico, 6 miles (10 kilometers) south of the town of Taos along New Mexico highway 518.

First named Rio Chiquito for the river running through the area, Talpa was settled during the early 18th century during the time that nearby Ranchos de Taos began to be settled. The settlement is on the old Spanish land grant of Don Cristobal de la Sena.

The name of the town may have been derived from the town of Talpa in Jalisco, Mexico or it may have been named for Señora Talpa Romero, of a prominent Taos family.

About 1820 a private chapel was built for the Duran family in Talpa along the Rio Chiquito. Juan Pedro Cruz (born about 1855) was a well-known weaver who supplied sarapes, embroidered bedspreads, and rugs to residents of the Taos Pueblo and local villages. Ponce de Leon Hot Springs, used by Native Americans and early Spanish settlers, are located near Talpa.

All content from Kiddle encyclopedia articles (including the article images and facts) can be freely used under Attribution-ShareAlike license, unless stated otherwise. Cite this article:
Talpa, New Mexico Facts for Kids. Kiddle Encyclopedia.