Tampa Bay Downs is an American Thoroughbred horse racing facility located in Westchase in Hillsborough County in the U.S. state of Florida, just outside Tampa. It opened in 1926 under the name Tampa Downs, and has also been known as Sunshine Park and Florida Downs and Turf Club.

The track races most Wednesdays, Fridays, and weekends from the end of November to the beginning of May.

The main track is a one-mile (1.6 km) dirt oval. The turf course is seven furlongs and includes a quarter-mile inner chute. Tampa Bay Downs, the only Thoroughbred race track on the west coast of Florida, has live racing action, simulcasting, poker, as well as golf at The Downs Golf Practice Facility. 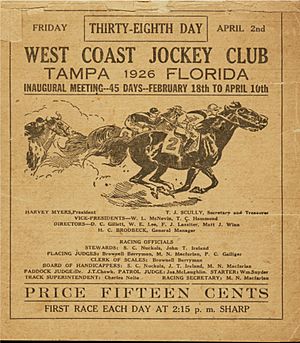 A photo of the original cover of the West Coast Jockey Club; Inaugural Meeting, 42nd day of racing.

Tampa Bay Downs first opened its doors in 1926 under the name of the Tampa Downs as the racetrack of the West Coast Jockey Club, and has since amassed a long and colorful history. The founding operation was headed by Ohio investor Harvey Myers and Kentucky Colonel Matt J. Winn.

In 1943, the United States Army took over the track for use as a training facility.

In 1946 the track was renamed Sunshine Park, and entered the modern era with the installation of an electric starting gate, photo finish and electric tote board.

During the 1950s, the racecourse was a popular attraction with many sportswriters who came to the Tampa Bay area to cover baseball spring training. Legendary names like Grantland Rice, Red Smith, Fred Russell and Arthur Daley became regular visitors, calling the track the "Santa Anita of the South."

The year 1965 marked the third name change for the track when it became Florida Downs and Turf Club. The track was renamed Tampa Bay Downs in 1980.

On February 12, 1981, Julie Krone, then a 17-year-old apprentice jockey and now a U.S. Racing Hall of Fame member, got her first career victory here on Lord Farkle.

The present owners, Stella F. Thayer and her brother Howell Ferguson, purchased the track in its entirety at auction in 1986. 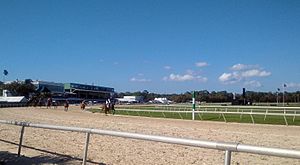 In 1998 Tampa Bay Downs added its 7/8-mile grass track, complete with a quarter-mile chute, which has become one of the most popular turf courses in North America. The course was completed in the spring of 1998 and the first race was contested on Kentucky Derby Day, May 2, 1998. This new avenue has provided more opportunities for horsemen and patrons alike. Other renovations include a 22-acre (89,000 m2) golf range and short-game area called The Downs Golf Practice Facility, including a 270-yard (250 m) driving range and betting machines.

Before the 2007-2008 race meet began, Tampa Bay Downs underwent several renovations, including the installation of the Grandstand elevator; the all-new Silks Poker Room, located on the third floor of the Grandstand; and the Party Suite, adjacent to the Silks Poker Room, which was also updated with new flat-screen TVs installed. The Legends Bar, which includes a museum-quality exhibition of famed Thoroughbred Seabiscuit, became the newest feature of the Legends Bar on the second floor of the Grandstand. Horsemen enjoyed improvements to the Paddock area, with all-new stalls in the saddling barn ensuring the safety and comfort of horses and their connections. Other facility upgrades at the Oldsmar oval include a refurbished Racing Office on the backstretch, as well as a renovated track kitchen.

Prior to the 2011–2012 meeting, the track installed Trakus, an electronic tracking system which displays the exact position and location of each horse on television monitors during a race. Tampa Bay Downs began a green initiative to eventually result in a net-zero impact on the environment. Other improvements included a CREE LED lighting system in the clubhouse and grandstand and the installation of a Gaco Sil S-20 Cool Roof coating system.

In 2007, Hall of Fame trainer Carl Nafzger brought his 3-year-old Street Sense to Oldsmar for the Tampa Bay Derby, and the colt's victory was a springboard to his win in the Kentucky Derby at Churchill Downs. Another Hall of Fame trainer, William Mott, selected Tampa Bay Downs for the first 2011 starts for his 3-year-old filly Royal Delta and 4-year-old colt Drosselmeyer. Royal Delta went on to twice win the Breeders' Cup Distaff and Drosselmeyer won the Breeders' Cup Classic.

All content from Kiddle encyclopedia articles (including the article images and facts) can be freely used under Attribution-ShareAlike license, unless stated otherwise. Cite this article:
Tampa Bay Downs Facts for Kids. Kiddle Encyclopedia.