Kids Encyclopedia Facts
In this Chinese name, the family name is Tang.

Tang was a native of Linchuan, Jiangxi and his career as an official consisted principally of low-level positions. He successfully participated in the provincial examinations (juren) at the age of 21 and at the imperial examinations (jinshi) at the age of 34. He held official positions in Nanjing, Zhejiang province, Guangdong province etc. He retired in 1598 and returned to his hometown where he focused on writing. Tang died in 1616, the same year as famed English playwright William Shakespeare.

His major plays are collectively called the Four Dreams, because of the decisive role dreams play in the plot of each one. All of them are still performed (in scenes, or in adapted full versions) on the Chinese Kun opera (kunqu) stage. Generally considered his masterpiece, the Mudan Ting (The Peony Pavilion) has been translated into English several times.

A translation of his complete dramatic works in English was published in China in 2014 and in London in 2018.

A few Ming and Qing playwrights followed Tang's writing style and called themselves the Yumintang or Linchuan school. 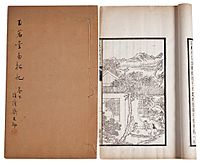 All content from Kiddle encyclopedia articles (including the article images and facts) can be freely used under Attribution-ShareAlike license, unless stated otherwise. Cite this article:
Tang Xianzu Facts for Kids. Kiddle Encyclopedia.