Tanya Roberts (born Victoria Leigh Blum; October 15, 1955 – January 4, 2021) was an American actress, producer, and model. She appeared in many movies and television series. Roberts was born in Bronx, New York, and has both an English and a Jewish background.

On December 24, 2020, Roberts collapsed suddenly at her home in Los Angeles. She was hospitalized under critical condition at the Cedars-Sinai Medical Center and she developed a urinary tract infection and sepsis. Roberts died on January 4, 2021 at aged 65. 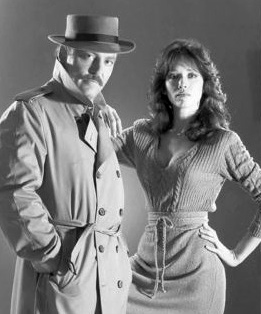 Stacy Keach and Tanya Roberts in 1983

All content from Kiddle encyclopedia articles (including the article images and facts) can be freely used under Attribution-ShareAlike license, unless stated otherwise. Cite this article:
Tanya Roberts Facts for Kids. Kiddle Encyclopedia.