Tatalina AFS was a continental defense radar station constructed to provide the United States Air Force early warning of an attack by the Soviet Union on Alaska.

The station consisted of a power/heating plant, water and fuel storage tanks, a gymnasium, and other support office buildings. Two other buildings contained living quarters, work areas, and recreational facilities plus opportunities for such sports as skiing, skating, horseshoes, and basketball. The station buildings were connected by heated hallways, except for the civil engineering building. As a result, personnel stationed there, with only very few exceptions, were able to wear "summer" uniforms year round, unless they had a need to go outside during the winter season. The coverings of the station's three radar towers were heated from within to keep the covering from becoming brittle from extreme cold and thus subject to being damaged or destroyed by high winds. Military tours durations at the station were limited to one year because of the psychological strain and physical hardships.

The 717th Aircraft Control and Warning Squadron (AC&W Sq) operated AN/FPS-3 AN/FPS-20, and AN/FPS-6 radars at the top site. The top site was a mini-station by itself, where twelve airmen lived: two for radio maintenance, nine for radar maintenance, and a cook. Barracks were connected between the radomes. Between the domes were other barracks rooms and the dayroom/library/kitchen/movie theater.

Tatalina AFS operated as a Ground Control Intercept (GCI) and warning station. As a GCI station, the squadron's role was to guide interceptor aircraft stationed at Ladd AFB toward unidentified intruders picked up on the unit's radar scopes. In March 1953, the Manual Air Defense Direction Center (MCC) at Murphy Dome AFS near Fairbanks exercised control over Kotzebue's radars where the data was analyzed to determine range, direction altitude speed and whether or not aircraft were friendly or hostile.

Communications were initially provided by a high frequency radio system which proved unreliable because of atmospheric disturbances. The Alaskan Air Command, after investigating various options, decided to build the White Alice Communications System, a system of Air Force-owned tropospheric scatter and microwave radio relay sites operated by the Air Force Communications Service (AFCS). The Tatalina site (62°55′40″N 156°01′29″W﻿ / ﻿62.92778°N 156.02472°W﻿ / 62.92778; -156.02472﻿ (Tatalina White Alice)) was activated in 1957. It was inactivated in 1979, and replaced by an Alascom owned and operated satellite earth terminal as part of an Air Force plan to divest itself of the obsolete White Alice Communications System and transfer the responsibility to a commercial firm.

Over the years, the equipment at the station was upgraded or modified to improve the efficiency and accuracy of the information gathered by the radars. In 1983, Tatalina received a new AN/FPS-117 minimally attended radar under Alaskan Air Command's SEEK IGLOO program. It was designed to transmit aircraft tracking data via satellite to the Alaskan NORAD Regional Operations Control Center (ROCC) at Elmendorf AFB.

No longer needed, the 717th AC&W Sq was inactivated on 1 November 1983 and the station redesignated as a Long Range Radar (LRR) Site. This left only contractor personnel to maintain the site radar. In 1990, jurisdiction of the Tatalina LRR Site was transferred to Pacific Air Forces (PACAF)'s Eleventh Air Force with the redesignation of AAC.

In 1998 PACAF initiated "Operation Clean Sweep", in which abandoned Cold War stations in Alaska were remediated and the land restored to its previous state. After years of neglect when the site was closed, the facilities at the station had lost any value they had. The site remediation was carried out by the 611th Civil Engineering Squadron at Elmendorf AFB, and remediation work was completed by 2005.

Today very little of the former Tatalina Air Force Station remains. The site is controlled by the PACAF 611th Air Support Group, based at Elmendorf AFB. Contractor access to the site to support the FPS-117 is by the Tatalina LRRS Airport. It is generally unattended; a few civilian contractors access the site for maintaining the facilities. 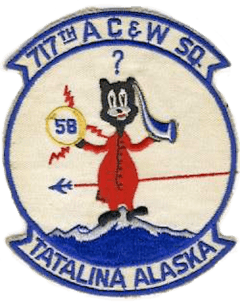 Emblem "A" of the 717th Aircraft Control and Warning Squadron 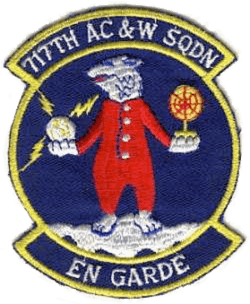 Emblem "B" of the 717th Aircraft Control and Warning Squadron

All content from Kiddle encyclopedia articles (including the article images and facts) can be freely used under Attribution-ShareAlike license, unless stated otherwise. Cite this article:
Tatalina Air Force Station Facts for Kids. Kiddle Encyclopedia.