Te Kuiti is a small town in the north of the King Country region of the North Island of New Zealand. It lies at the junction of State Highways 3 and 30 and on the North Island Main Trunk railway, 80 kilometres (50 mi) south of Hamilton. At the 2001 census it had a resident population of 4,374, a decrease of 5.1% since 1991. The town promotes itself as the sheep shearing capital of the world and is host to the annual New Zealand National Shearing Championships.

Te Kuiti is approximately 80 km south of Hamilton and 19 km south-east of Waitomo. The area around Te Kuiti, commonly known as the King Country, gives its name to the Heartland Championship rugby team based in Te Kuiti.

Te Kuiti is the Maori name given to the area. In its original form of "Te Kuititanga", it literally means "the valley", "the squeezing in" or "the narrowing". 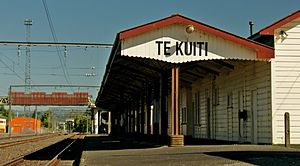 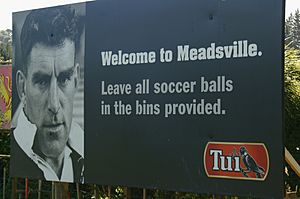 The "Shearing Capital of the World" contains the world's largest shearer, seven metres high. On 1 April 2006 the largest sheep show in the world took place here, with more than 2000 sheep. 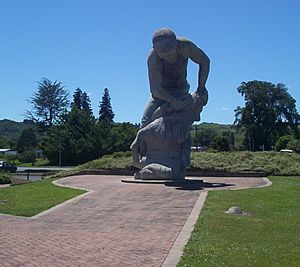 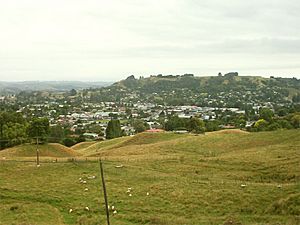 Te Kuiti viewed from the south-west as SH3 climbs out of the town.

The carved Te Tokanganui-A-Noho Meeting House was gifted to the local Maori people (Ngāti Maniapoto) by Te Kooti, the most famous Maori Rebel leader of the 19th century. He was given sanctuary by the Chiefs of Maniapoto against the white colonial Government of New Zealand and under Maniapoto's protection carved one of the most famous and important late 19th century spiritual house in the north island.(as mentioned above). This House is central to Te Kuiti's historical foundation, also referred to as the epicenter of the Rohe Pōtae.. "King Country"...In 1881 the last frontier was open to colonial settlers.

The Tatsuno Japanese Garden is at the southern end of the main street.

The Mangokewa reserve located 5 km south of Te Kuiti is a popular attraction for rock climbers, hikers, picnic goers, swimmers and trout fisherman in the region.

A 'Revitalisation Project' for the NZHPT Category II listed Te Kuiti railway station was started in 2014 to provide for arts and crafts groups, an education centre, youth projects, historical displays and a meeting room. The Rail Heritage Trust describes the station as, "the finest remaining example of a standard class B station"

Limestone deposits and water have created the Waitomo Caves, northwest of the town, one of New Zealand's most-visited tourist locations. The town itself is located in a valley with many rich limestone deposits. The Manga-o-Kewa Stream runs through the valley and is a tributary of the Waipā River. Te Kūiti's hinterland consist mainly of farmland and limestone quarries. The land surrounding Te Kūiti has steep hilly relief which reflects the nature of the North King Country region. The climate of Te Kūiti is wet during the winter and dry during the late summer with an average of 1,450mm of rainfall each year.

All content from Kiddle encyclopedia articles (including the article images and facts) can be freely used under Attribution-ShareAlike license, unless stated otherwise. Cite this article:
Te Kuiti Facts for Kids. Kiddle Encyclopedia.