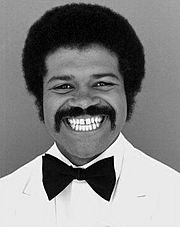 Theodore William "Ted" Lange (born January 5, 1948) is an American actor, director, producer, and screenwriter. He is best known for his role as the bartender, Isaac Washington, in the 1970s TV series The Love Boat.

Lange was born on January 5, 1948 in Oakland, California. He studied at the Royal Academy of the Dramatic Art. Lange has been married to Mary Ley since 2001.

All content from Kiddle encyclopedia articles (including the article images and facts) can be freely used under Attribution-ShareAlike license, unless stated otherwise. Cite this article:
Ted Lange Facts for Kids. Kiddle Encyclopedia.