Telephone is an unincorporated community in Fannin County, Texas, United States. According to the Handbook of Texas, the community had an estimated population of 210 in 2010. 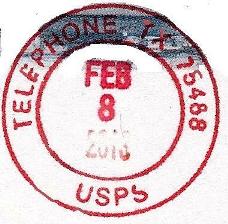 Although the first settlers arrived in the area during the 1870s, a community did not develop until the mid-1880s. The community received its name because the only telephone in the area was located in a general store owned by Pete Hindman. When Hindman applied for permission to open a post office, authorities repeatedly refused his submissions because the suggested names were already used by other post offices in the state. He finally submitted the name Telephone, which was accepted, and the post office opened in 1886. By 1890, Telephone had an estimated population of 30. The community continued to grow and by the outbreak of World War I, the number of residents had increased to 100. Unlike many rural communities in Texas during the Great Depression, Telephone's population remained stable at around 100. By the mid-1940s, the community had ten businesses and 280 residents. In 1990, Telephone had six businesses, a post office, and an estimated population of 210. That figure remained unchanged as of 2000, and still remains unchanged as of 2010.

Although it is unincorporated, Telephone has a post office, with the ZIP code of 75488.

All content from Kiddle encyclopedia articles (including the article images and facts) can be freely used under Attribution-ShareAlike license, unless stated otherwise. Cite this article:
Telephone, Texas Facts for Kids. Kiddle Encyclopedia.