The Temora Aviation Museum is an Australian aviation museum located in Temora, New South Wales. The Museum was established in late 1999, based on the collection of warbird aircraft owned by David Lowy. Lowy remains the President and Founder of the Museum, which is overseen by a four-member Governing Committee.

The Museum is home to many historic ex-military aircraft that range from the World War II era to the Vietnam War era and holds Aircraft Showcase (on the 1st & 3rd Saturdays of most months) to display some of its operating aircraft.

The Museum often hosts visits from historical aircraft and Royal Australian Air Force combat aircraft such as the F/A-18 Hornet. The town of Temora is notable in Australian aviation history. The Royal Australian Air Force set up the No. 10 Elementary Flying Training School there in May 1941, the largest and longest-lived of the schools established under the Empire Air Training Scheme during World War II.

More than 10,000 personnel were involved in the school's operation, with more than 2,400 pilots being trained there, and at its peak had 97 de Havilland Tiger Moth aircraft for training purposes. The school was closed on 12 March 1946.

Temora Aviation Museum was incorporated in late 1999, at which point construction of the facilities commenced, and a governing committee was formed. The first hangar was completed in February 2000, and the first aircraft for the collection were donated by Lowy. The museum was officially opened to the public in June 2000 at which point construction commenced on the exhibition buildings, including: display space, theatrette, admission entrance, gift shop, a children's playground and picnic area.

In November 2002, the third stage of the museum complex, a 1,980 square metres (0.49 acres) hangar was completed and became the main display hangar for all the aircraft, while the original hangar became a restoration and maintenance facility.

In May 2019 the museum announced that it had reached an agreement with the Department of Defence to transfer ownership of 11 historically significant aircraft to the Royal Australian Air Force, effective 1 July 2019. Under the agreement the aircraft would continue being housed at Temora and maintained by the same staff, but operated by the Air Force Heritage Squadron as the Temora Historic Flight. Twelve of the club's pilots were inducted into the RAAF Reserve as Special Capability Officers with the rank of Flight Lieutenant. 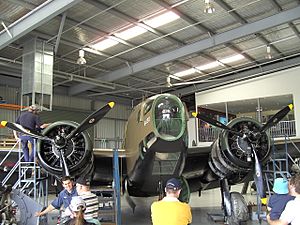 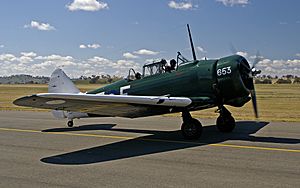 Temora's population of 4,000 swells at the time of Warbirds Downunder with almost 10,000 people attending the inaugural show in 2011.

The airshow is now held over a full weekend, the next was scheduled for Saturday and Sunday 17–18 October 2020, however due to COVID-19 this has been postponed to 2021.

All content from Kiddle encyclopedia articles (including the article images and facts) can be freely used under Attribution-ShareAlike license, unless stated otherwise. Cite this article:
Temora Aviation Museum Facts for Kids. Kiddle Encyclopedia.