Temora is a town in the north-east of the Riverina area of New South Wales, 418 kilometres (260 mi) south-west of the state capital, Sydney. At the 2016 census the population of Temora was 4,693.

Temora has been reported as being the friendliest town in New South Wales, following a series of mentions in the Sydney Morning Herald's Column 8, which organised a bus trip to the town for Sydney readers in 2005.

Temora was named by John Donald McCansh. In September 1880 he told the Warwick Argus:

I took up the country for a sheep run in 1847, my sole companion being Valentine Lawler, who was then lessee of a station ('Nimbi') on Cunningham Creek. We could not ascertain the native name of the place as there were no blacks about, and rather than give it an English name, I called it 'Temora', the native name of a property near which I lived some years previously in another part of the Colony. I gave the station the name specially because it was aboriginal and I liked it. I did not know at that time, nor for years afterwards, that Temora was a name in Ossian’s poems.

Neither the Wiradjuri Dictionary (2010) nor the Macquarie Dictionary of Aboriginal Words (2006) lists "temora" or any words similar to it, but the Dharug language dictionary online defines "temora" as "a tree standing alone". Alternatively, in the Celtic language it is derived from a term which means "an eminence commanding a wide view."

Temora is located in North Eastern end of the Riverina region of NSW and is also part of the South West Slopes. Temora has an elevation of 302 metres (991 ft) above sea level. The countryside is flat to undulating. To the north of Temora lies the Narraburra Hills which incorporate the Boginderra Hills Nature Reserve.

Temora is located approximately 90 kilometres (56 mi) north of Wagga Wagga. It is situated on the Burley Griffin Way linking Canberra and Griffith and the Goldenfields Way which link Albury and Wagga Wagga to the Newell Highway.

Temora has a warm temperate climate, with cool to mild winters and warm to hot summers. Under the Köppen climate classification, Temora has a borderline humid subtropical (Cfa) and semi-arid climate (BSk). 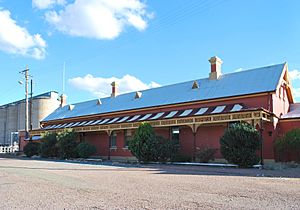 Temora started as a pastoral station in 1847. Gold was discovered later in the area, and a small village established. Temora Post Office opened on 1 February 1874 and was renamed West Temora in 1880 on the same day an existing East Temora office was renamed Temora.

Gold was first found in the area in 1869 but the main rush commenced in 1879, with over 20,000 people thronging to the gold diggings at Temora the district was proclaimed a gold field on June 4, 1880. Despite drought conditions, it is said that, by 1881, the Temora field was producing half the state's gold. In 1881 the highest yield from the Temora field was attained - an Impressive 35,228oz.

Some large discoveries were made, including the famous Mother Shipton nugget, which weighed in at 308.35 ounces, a facsimile of which appears in the Rock and Mineral Museum section of Temora Rural Museum.

With the collapse of the gold field Temora witnessed a rapid drop in population. By the time of the first Australian Census in 1911 the population was 2,784.

The Temora railway station opened in 1893.

In the early twentieth century, Temora was among a number of places in New South Wales settled by people of German origin. Temora and surrounding districts such a Trungley have many Germanic road names.

In more recent times, gold mining occurred at the Paragon Gold Mine at Gidginbung, 12 km north of the town, from 1986 to 1996.

Temora railway station is on the Lake Cargelligo railway line which served the Riverina town of Temora, New South Wales, Australia. It opened in 1893.[1] The station had a traditional role as a transfer point for passenger services to Hillston, Lake Cargelligo, Rankin Springs, Burcher and Naradhan, most of which were withdrawn in the late 1970s. The station is not presently served by passenger services however remains an important signalling facility, is used as a stop by the Lachlan valley Railway and is currently being restored by Temora Shire Council for use a tourist and youth facility.

The Lake Cargelligo railway line branches from the Main South line at Cootamundra and travels in a north-westerly direction to the small town of Lake Cargelligo. The line is used primarily for grain haulage, although passenger service was provided until 1983.

The Temora–Roto railway line is a partly closed railway line which branches from the Lake Cargelligo line at the town of Temora and travels west through the northern part of the Riverina to the towns of Griffith and Hillston. A connection to the Broken Hill line created a cross-country route, although this was never utilised to its full potential, and the line beyond Hillston was built to low grade 'pioneer' standards.

Temora Airport can handle aircraft up to Boeing 737 size. Currently no scheduled passenger flights serve the airport. As well as the aviation museum the airport also includes a housing estate where people have built houses with an aircraft hangar in their back yard.

NSW Trainlink trains operate from Sydney and Melbourne to Cootamundra train station where they are met by a connecting bus service to transport passengers to Temora. The train to Melbourne includes a stop at Wagga which provides further links to Adelaide.

Sport has long been a significant part of life in Temora as can seen by the success Temora has had in various sporting arenas.

All content from Kiddle encyclopedia articles (including the article images and facts) can be freely used under Attribution-ShareAlike license, unless stated otherwise. Cite this article:
Temora, New South Wales Facts for Kids. Kiddle Encyclopedia.