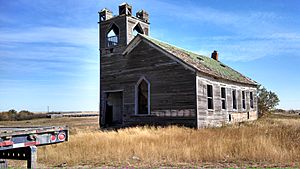 Temple is an abandoned township located in Williams County, North Dakota. There are few remaining structures which include: a small garage, a couple small outbuildings and a couple caved-in houses. The Temple school and church have been destroyed recently and the foundations filled in. There are some residents, mainly campers which are used by oilfield people.

The township known as Temple was first established on July 16, 1906, and was originally named Haarstad, for Ole G. Haarstad, the township postmaster and townsite owner. The town was later renamed to "Temple" by officials of the Great Northern Railway. Temple's post office was created on March 12, 1908, and was closed April 30, 1965.

All content from Kiddle encyclopedia articles (including the article images and facts) can be freely used under Attribution-ShareAlike license, unless stated otherwise. Cite this article:
Temple, North Dakota Facts for Kids. Kiddle Encyclopedia.