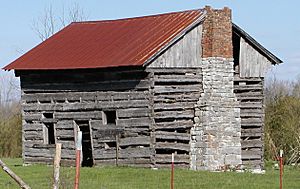 Ten Mile is an unincorporated community in northern Meigs and southeastern Roane counties in the U.S. state of Tennessee. The Roane County portion is included in the Harriman, Tennessee Micropolitan Statistical Area.

Ten Mile is primarily a summer cottage community on Watts Bar Lake. It includes summer cottages, small locally owned stores and restaurants, a bank, marinas, resorts, churches, and a Post Office (ZIP code 37880). The nearby TVA Watts Bar nuclear plant (in bordering Rhea County), and Watts Bar Dam spanning the Tennessee River across the Meigs County and Rhea County lines have played, and continue to play, an important role in the local economy.

Ten Mile originated in a small community at the cross of Old Ten Mile and Ten Mile roads, which is next to Ten Mile Creek. The community consisted of a small school, a post office and two churches. The town has now moved closer to Watts Bar Lake. The only things that still exist in the old community are the two churches.

The Ten Mile community is named after the stream flowing through it, Ten Mile Creek. Although there are no definitive archives to specifically document who named the stream Ten Mile Creek or why, based on early maps of the area, the best educated guess is that the distance of the creek measures approximately 10 miles.

The Elisha Sharp House in Ten Mile, Tennessee was added to the National Register of Historic Places on July 6, 1982.

All content from Kiddle encyclopedia articles (including the article images and facts) can be freely used under Attribution-ShareAlike license, unless stated otherwise. Cite this article:
Ten Mile, Tennessee Facts for Kids. Kiddle Encyclopedia.