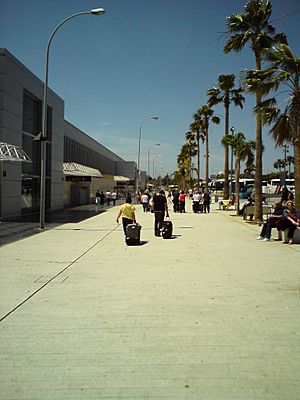 Outside of Tenerife South Airport

Tenerife South "Reina Sofia" Airport (IATA: TFS ICAO: GCTS) is an airport in the south-west of the island of Tenerife, one of the Canary Islands.

This is actually one of two airports in Tenerife, the other one is Tenerife North (Los Rodeos). Most of the flights bringing people on holiday to the island use this airport. The airport was opened in 1978 after it was decided in a few years earlier that Tenerife needed a new airport urgently due to foggy weather closing Tenerife North airport quite often. The first flight to land at the airport was carrying the Queen of Spain Her Majesty Queen Sofia, the airport is named after her. The airport is operated by a company called AENA which operates all civil airports in Spain.

In 2009, just over 7 million passengers used the airport.

All content from Kiddle encyclopedia articles (including the article images and facts) can be freely used under Attribution-ShareAlike license, unless stated otherwise. Cite this article:
Tenerife South Airport Facts for Kids. Kiddle Encyclopedia.