Events of the Tenshō era 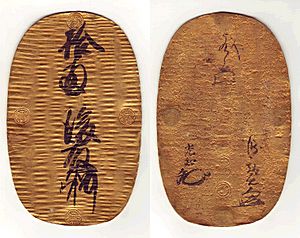 Oda Nobunaga suggested that a new era should begin in 1573. The general meaning of Tenshō was "heavenly righteousness".

In 1589-1590 (in the 23rd year of the reign of King Seonjo of Joseon), a diplomatic mission led by Hwang Yun-gil was sent to Japan. The Joseon ambassador was received by Hideyoshi.

The Tenshō era as shown in a Japnese classic film

The fictional plot of the classic Akira Kurosawa film The Seven Samurai takes place in the 15th year of Tenshō.

All content from Kiddle encyclopedia articles (including the article images and facts) can be freely used under Attribution-ShareAlike license, unless stated otherwise. Cite this article:
Tenshō (Momoyama period) Facts for Kids. Kiddle Encyclopedia.