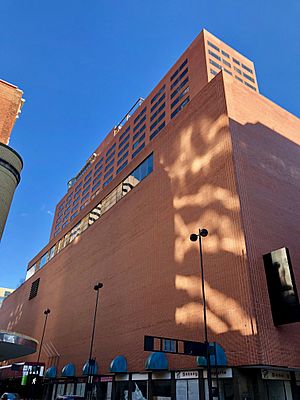 Postcard of the hotel

The Terrace Plaza Hotel is an 18-story International Style mixed-use building completed in 1948 in downtown Cincinnati, Ohio, USA. It sits at 15 West 6th St between Vine and Race Streets.

Designed by the architecture firm of Skidmore, Owings, & Merrill between 1946-1948, the Terrace Plaza Hotel was their first hotel project and one of the first high-rise projects to be constructed in the United States after World War II. SOM went on to design some of the world's tallest and most iconic buildings. SOM assigned Natalie de Blois to be the lead architect and the team planned details down to furniture and matchbook covers.

The building was considered groundbreaking modernism when it opened. Harper's Magazine published “If you want to discover what your grandchildren will think of as elegance of this postwar era, you will have to go to Cincinnati.”

The building originally housed two department stores in a windowless lower block style portion of the building. The hotel portion rose above the stores in a very different style. A 5-star French restaurant with wall to wall windows sat above the hotel. The 8th floor plaza even hosted ice skating in the winter.

Inside, the decor was accented with modern art (later removed and installed at the Cincinnati Art Museum), including a stunning abstract mural by Joan Miró, another mural showing Cincinnati landmarks by Saul Steinberg and work by Alexander Calder. Above the stores on the first seven floors, the hotel lobby on the 8th floor was accessed via high speed elevators.

The hotel closed in 2008 but efforts to renovate it are planned. It was listed on the National Register of Historic Places in 2017. In 2020, the National Trust for Historic Preservation named it as one of America's most endangered historic places.

All content from Kiddle encyclopedia articles (including the article images and facts) can be freely used under Attribution-ShareAlike license, unless stated otherwise. Cite this article:
Terrace Plaza Hotel Facts for Kids. Kiddle Encyclopedia.