Terry Hershey Park is a county park that runs parallel to a roughly 6-mile (9.7 km) stretch of the Buffalo Bayou in western Houston, Texas. The park is named after Terry Hershey, a conservationist who campaigned to keep the banks of Buffalo Bayou from being paved. The park hosts a network of trails that run along the bayou from State Highway 6 to the Sam Houston Tollway and is a popular destination for local residents, runners, bicyclists and Geocachers. 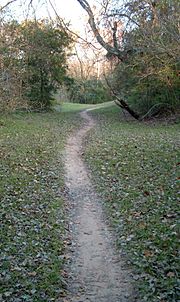 A trail along the bayou.

The park maintains a network of both paved asphalt paths and dirt trails along the bayou. The paved walkways are located in the cleared stretch of the park, free of trees, and are about 10 feet in width. The dirt trails, however, cut through the densely grown forest growing along the bayou, and are not easily accessible.

As of August 2020, e-bikes and other electric/battery powered transportation are prohibited on the trails. Per State Law, Texas Transportation Code Sec. 551.106(a), e-bike prohibition is only valid on dirt trails. E-bike is still allowed on paved trails where operation of non-electric bicycles is permitted.

The park promotes its signature bike trails, the "Anthills", on its website. 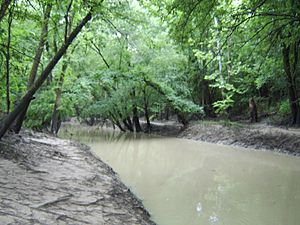 A branchoff bayou in the park.

Neighborhoods along the park

Neighborhoods are listed from east to west.

All content from Kiddle encyclopedia articles (including the article images and facts) can be freely used under Attribution-ShareAlike license, unless stated otherwise. Cite this article:
Terry Hershey Park Facts for Kids. Kiddle Encyclopedia.