The Andalusia is an apartment building located at 1471-1475 Havenhurst Dr. in Hollywood, Los Angeles, California, built in 1926 in Spanish Colonial Revival style. The building was listed in the National Register of Historic Places in 2003. Additionally, it is designated as Los Angeles Historic Cultural Monument No. 435. 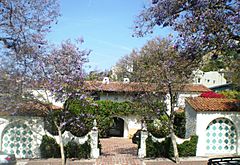 View from the street

All content from Kiddle encyclopedia articles (including the article images and facts) can be freely used under Attribution-ShareAlike license, unless stated otherwise. Cite this article:
The Andalusia (Los Angeles, California) Facts for Kids. Kiddle Encyclopedia.