The Chateau Marmont is a hotel located at 8221 Sunset Boulevard in Los Angeles, California. The hotel was designed by architects Arnold A. Weitzman and William Douglas Lee and completed in 1929. It was modeled loosely after the Château d'Amboise, a royal retreat in France's Loire Valley.

The hotel is known as both a long- and short-term residence for celebrities – historically "populated by people either on their way up or on their way down" – as well as a home for New Yorkers in Hollywood. The hotel has 63 rooms, suites, cottages, and bungalows.

The Chateau Marmont, as of 2020, is a members-only hotel.

In 1926, Fred Horowitz, a prominent Los Angeles attorney, chose the site at Marmont Lane and Sunset Boulevard to construct an apartment building. Horowitz had recently traveled to Europe for inspiration and returned to California with photos of a Gothic Chateau along the Loire River. In 1927, Horowitz commissioned his brother-in-law, European-trained architect Arnold A. Weitzman, to design the seven-story, L-shaped building based on his French photos. When deciding upon a name for the building, Chateau Sunset and Chateau Hollywood were rejected in favor of Chateau Marmont, after the small street running across the front of the property.

On February 1, 1929, Chateau Marmont opened its doors to the public as the newest residence of Hollywood. Local newspapers described the Chateau as "Los Angeles's newest, finest and most exclusive apartment house […] superbly situated, close enough to active businesses to be accessible and far enough away to insure quiet and privacy." For the inaugural reception, over 300 people passed through the site, including local press.

Due to the high rents and inability to keep tenants for long-term commitments during the Great Depression, Horowitz sold the apartment building in 1931 to Albert E. Smith, co-founder of Vitagraph Studios, for $750,000 in cash (equivalent to $10,500,000 in 2018). Smith converted the building into a hotel, an investment which benefitted from the 1932 Summer Olympics in Los Angeles. The apartments became suites with kitchens and living rooms. The property was also refurbished with antiques from depression-era estate sales. During the 1930s, the hotel was managed by former silent film actress Ann Little.

During World War II, the hotel served as an air-raid shelter for residents in the surrounding area. From about 1942 to 1963 the Chateau was owned by Erwin Brettauer, a German banker who had funded films in Weimar Germany, and was noted for allowing black guests, breaking the long-standing color line in Hollywood and Beverly Hills hotels.

Designed and constructed to be earthquake-proof, Chateau Marmont survived major earthquakes in 1933, 1953, 1971, 1987, and 1994 without sustaining any major structural damage. Nine Spanish cottages, as well as a swimming pool, were built next to the hotel in the 1930s and were acquired by the hotel in the 1940s. Craig Ellwood designed two of the four bungalows in 1956, after he completed Case Study Houses.

Business was good for the hotel, although by the 1960s, the building was in disrepair, and the owners attempted to sell it multiple times. News articles about the hotel from the 1960s and '70s described it as an "elderly castle", a "dowdy hotel", "rundown", and "shabby-genteel". 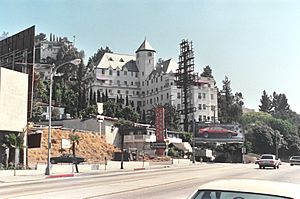 After sitting on the market for two years, the Chateau was sold in 1975 to Raymond R. Sarlot and Karl Kantarjian of Sarlot-Kantarjian, a real estate development firm, for $1.1 million. Sarlot-Kantarjian planned to expand the hotel with a new wing. They repaired and upgraded many elements of the hotel, but tried to stay true to the hotel's character and history. In 1976, after their acquisition and improvements began, the Chateau was named a Los Angeles Historic-Cultural Monument. In The New York Times, writer Quentin Crisp praised the Chateau's "avoiding undue modernization and stayed deliberately in the romantic past."

The hotel was acquired in 1990 by André Balazs. Balazs needed to modernize the hotel, while also preserving Chateau Marmont's character. For the restoration, Balazs strove to create the illusion that the hotel had been untouched, notwithstanding renovations. The entire facility was re-carpeted, repainted, and the public spaces were upgraded.

In order to preserve the privacy of the hotel and bungalows, higher fences plus coverings were used to discourage the public from looking into the grounds.

in 2020, the Chateau Marmont converted to a private members-only hotel.

The Chateau is featured—often as a setting—in many books, including Eve Babitz's Eve's Hollywood (1974) and Slow Days, Fast Company (1977), James Ellroy's The Big Nowhere (1989), Dominick Dunne's An Inconvenient Woman (1990) and Another City, Not My Own (1997), Charles Bukowski's Hollywood (1995), Lauren Weisberger's Last Night at Chateau Marmont (2010), and Michael Connelly's The Drop (2011). It is also the office of fictional paparazzo Patrick Immleman in the Panel Syndicate web comic The Private Eye. In 2019, Doubleday published Shawn Levy's The Castle on Sunset: Life, Death, Love, Art, and Scandal at Hollywood's Chateau Marmont (2019) ISBN: 978-0385543163.

The hotel has also been referred to in many songs, including the title track “Plastic Hearts” by Miley Cyrus’ from her 2020 album,[1] Panic! At The Disco's "Dying in LA", the Grateful Dead's "West L.A. Fadeaway" from the album In the Dark, Lana Del Rey's (who also has a tattoo of the Hotel's name ') 2011 single "Off to the Races" from Born to Die. Father John Misty's "Chateau Lobby #4 (in C for Two Virgins)" from I Love You, Honeybear (2015), Angus & Julia Stone's 2017 single "Chateau" from Snow, Lily Allen's 2017 single "Trigger Bang" from No Shame, and Joshua Radin's 2020 single "Chateau." In 2017, Jarvis Cocker and Chilly Gonzales collaborated on a concept album of music inspired by the hotel, named Room 29, after one of the rooms with a piano. This is also the hotel where the infamous No Love Deep Web album art cover by Death Grips was taken.

In art and fashion

Actor James Franco created a replica of the Chateau's Bungalow 2 for his Rebel Without a Cause exhibit at MOCA in 2012. The hotel's stationery has featured in work by artists André, Gary Baseman, Robert Gober, Martin Kippenberger, and Claes Oldenburg, among others. The Chateau's branding was featured in a capsule collection from fashion label Gucci in 2018. 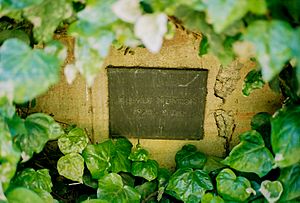 Memorial plaque at site of Helmut Newton's accident, marking the spot where his car hit the wall

Photographer Helmut Newton died on January 23, 2004 after crashing his car when pulling out of the driveway.

All content from Kiddle encyclopedia articles (including the article images and facts) can be freely used under Attribution-ShareAlike license, unless stated otherwise. Cite this article:
Chateau Marmont Facts for Kids. Kiddle Encyclopedia.