The Big Texan Steak Ranch is a steakhouse restaurant and motel located in Amarillo, Texas, United States which opened on the previous U.S. Route 66 in the 4500 block of East Amarillo Boulevard in 1960. It relocated to its present location on Interstate 40 in 1970. Fire gutted the west wing of the restaurant in 1976 and destroyed $100,000 in antiques. The restaurant reopened as a larger facility in 1977. The building is painted a bright yellow, with blue trim. A large bull statue advertises their "free" 72 oz. steak (see below). The now-closed Texas Tornado Museum resided off in a far corner of the parking lot on the property. 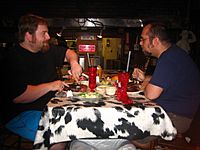 The Big Texan is best known for its 72 ounce (4.5 pounds or 2.04 kg) steak. The steak is free to anyone who, in one hour or less, can eat the entire meal, consisting of the steak itself, a bread roll with butter, a baked potato, shrimp cocktail, and a salad; otherwise, the meal costs $72. Those who have successfully consumed the 72oz steak challenge have their names recorded and posted at the restaurant. To date, over 9,800 people out of about 68,000 people who attempted this challenge have accomplished this feat.

According to the restaurant, when featured on the TV show Man v. Food, the challenge started in 1960, when founder Bob Lee decided to hold a contest over which of the cowboys working in the stockyards could eat the most steaks in one hour, with a prize of $5 (over $41 when adjusted for inflation in 2017) at stake. One cowboy ate four and a half 1-pound steaks, a shrimp cocktail, a baked potato, a dinner roll, and a salad in the hour's time to win the $5. Lee was so impressed with the achievement that he declared, "Whoever eats that much again in my restaurant, he gets it for free." Those who take on the 72oz steak challenge are required to pay for the meal in advance and, if they are successful, their money is refunded. The steak is cooked to the participant's preference, and the challenge takes place at a table for six on a raised platform in the middle of the main dining room.

The record for the shortest time to finish the entire 72oz steak challenge had been held by competitive eating champion Joey Chestnut (at 8 minutes and 52 seconds), breaking Frank Pastore's 1987 record (of 9 minutes 30 seconds, which stood for 21 years) on his March 24, 2008 visit. On May 26, 2014, he was bested by 125-pound competitive eater Molly Schuyler, who polished off the meal in just 4 minutes 58 seconds, and came back for seconds (14 minutes and 57 seconds for two meals). She did not, however, eat a third steak meal in the same hour. Schuyler returned on April 19, 2015 and would finish her first meal in 4 minutes 18 seconds, beating her own record by 40 seconds. She had defeated four other teams of competitors in the challenge, devouring two more meals in twenty minutes. The unofficial record (for all animals, including humans) was held by a 500-pound Siberian tiger who ate the steak in 90 seconds in 1999, until bested by a lioness in 2012 clocking in at 80 seconds.

The restaurant features a live streaming service that is focused on the stage in which competitors attempt the challenge. Big Texan's website also features a Hall of Fame section that displays all the names, dates, times, weight height and age of all the winners of the steak challenge.

From mid-March to early May 2020, because of the COVID-19 outbreak concerns, the challenge was suspended; the restaurant had to temporarily shut down but delivery & serving curbside were still available. Social distancing prevents fans from interfering with contestant(s). 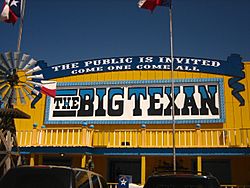 The Texas King meal is shown in the movie Waking Up in Reno, with Billy Bob Thornton taking the challenge. It is also shown on the Travel Channel's Man v. Food, where host Adam Richman completes the challenge and in Anthony Bourdain: No Reservations, where Bourdain declines to compete but his cameraman takes part and fails.

In the Season 3 episode of King of the Hill "And They Call It Bobby Love", the Steak Ranch was parodied with a similar restaurant called the "Panhandler Steakhouse." Bobby Hill accepts the challenge only to spite the girl that spurned his affections (who was also a vegetarian). He completes the challenge but upon returning home subsequently vomits.

A billboard advertising the restaurant appears in a panel in George Takei's autobiographical graphic novel They Called us Enemy.

In February 2021, The Big Texan changed their steak eating contest table to a different view, upsetting many loyal fans. In the midst of fans expressing their dissatisfaction via the Big Texans online discussion board, comments were suddenly being deleted & moderated. This angered fans even more, with some declaring that they were going to give up steak all together.

Inside the lobby of The Big Texan Steak Ranch is one of the largest Texas gift shops. The shop features a live rattlesnake as well as various products that range from Route 66, John Wayne, Big Texan T-shirts, Brewery merchandise, and much more. Guest can shop online at the gift shop website.

Located adjacent to the restaurant on The Big Texan Steak Ranch property is the 54-unit Big Texan Motel. The cinder-block construction motel is designed to resemble a main street in an old west town, and features Texas-themed decor and a Texas-shaped pool. In 2004, a 20-stall stable was added behind the main motel building.

The Big Texan also offers guest to stay at their RV park.

In 2013, viewers of Bob Phillips's Texas Country Reporter voted the Big Texan the "No. 1 Steakhouse in Texas".

The second and third place designees are the Little Rhein Steak House (in Downtown San Antonio along the famous River Walk) and Perini's Ranch Steakhouse (in Buffalo Gap, south of Abilene in Taylor County).

All content from Kiddle encyclopedia articles (including the article images and facts) can be freely used under Attribution-ShareAlike license, unless stated otherwise. Cite this article:
The Big Texan Steak Ranch Facts for Kids. Kiddle Encyclopedia.