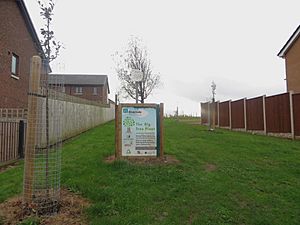 Trees planted as part of the scheme

The Big Tree Plant was a Government-sponsored campaign in England in 2010, to promote the planting of one million trees in neighbourhoods where people lived and worked. The campaign ran over four years from 2011 to 2015, and was the first such initiative since Plant A Tree In '73.

The campaign aimed to halt the ongoing decline in urban and semi-urban tree planting in England. The decline was highlighted by a survey of urban trees in England carried out in 2005 (published as the report Trees in Towns II in 2008), which found that there had been a 'big reduction' in urban tree planting (compared to a similar 1992 survey) leading to an 'unsatisfactory age structure' with too few young trees, and which concluded that the issue should be 'urgently addressed'. In London a separate 2007 report, Chainsaw Massacre, found that there were concerns about planting rates in some boroughs, and that mature broadleaf street trees throughout London were under 'severe threat' due to a mixture of development pressures, reduced expenditure, public apathy and antipathy, and (often unsubstantiated) concerns by insurance companies, solicitors and home-owners over subsidence. Both reports also expressed concern over the practice of planting smaller ornamental species rather than native broadleaf trees such as London plane, lime and oak.

Funding of £4.2m was to be made available for community, civic and other non-profit groups from April 2011. In addition to covering planting costs, grants could be used for related purposes such as community involvement, site surveys and the provision of expert advice. £4m of the funding allocation was being promised by the Forestry Commission through 'efficiency savings and reprioritisation', while the remaining £200,000 will come from the existing London Tree and Woodland Community Grant. The independently chaired Big Tree Plant Grants Panel included representatives from civil society organisations, DEFRA, and the Forestry Commission, and met each spring and summer to award funds.

In advance of the main funding, Keep Britain Tidy - one of the partners supporting the initiative - had already invited applications for planting kits from schools in the Government's Eco-School programme.

The DEFRA-led The Big Tree Plant campaign was backed by a number of partners including The Tree Council, Woodland Trust, Trees for Cities, England’s 12 Community Forests, the National Forest, BTCV, Civic Voice, Groundwork UK, Keep Britain Tidy, the Local Government Association, the Department for Communities and Local Government and the Forestry Commission.

All content from Kiddle encyclopedia articles (including the article images and facts) can be freely used under Attribution-ShareAlike license, unless stated otherwise. Cite this article:
The Big Tree Plant Facts for Kids. Kiddle Encyclopedia.