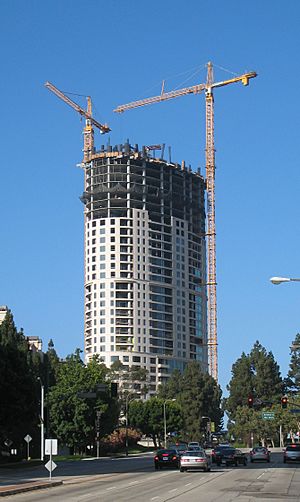 The Century is a 42-story, 146.5 m (481 ft) condominium skyscraper in Century City, California. Completed in late 2009, the building has 42 floors, making it the 22nd tallest building in Los Angeles. The 140 unit building was designed by the firm of the 2011 Driehaus Prize winner, Robert A.M. Stern Architects.

The Century was developed by Related Companies, and constructed on the site of the former St. Regis Los Angeles, formerly part of the Century Plaza Hotel.

On July 22, 2008 Candy Spelling, the widow of late television producer Aaron Spelling, purchased the penthouse occupying the top two floors of the building. The residence, which is approximately 16,500 sq ft (1,530 m2), set a price-per-square-foot record for a Los Angeles condominium residence. She later filed a lawsuit against the building developers for taking too long to build it.

All content from Kiddle encyclopedia articles (including the article images and facts) can be freely used under Attribution-ShareAlike license, unless stated otherwise. Cite this article:
The Century (Los Angeles) Facts for Kids. Kiddle Encyclopedia.