The Church Studio facts for kids

The Church Studio is a recording studio in Tulsa, Oklahoma established in 1972 by musician, songwriter, and producer Leon Russell. Located in a converted church building, the studio has since been cited as being the heart of the Tulsa Sound.

Originally built in 1915 as Grace Methodist Episcopal Church, the stone structure located at 304 South Trenton Avenue in Tulsa's Pearl District was converted to a recording studio in 1972 by Leon Russell, who bought the building and adjoining properties for his diverse recording activities and as a home for Shelter Records, the company he had previously started with partner Denny Cordell. Russell eventually sold the building. Tulsa musician Steve Ripley, leader of The Tractors and partners bought it in 1987 and retained ownership until 2006.

Leon Russell ultimately was inducted into the Rock & Roll Hall of Fame, Songwriters Hall of Fame, and Oklahoma Music Hall of Fame. Following Russell's death in 2016, flowers, paintings, memorabilia, and notes left by fans covered the church steps as a memorial.

In 2009, new owners Jakob and Randy Miller declared their intention to revive The Church Studio as a music facility. The following year, the Pearl District Association and the city of Tulsa collaborated to rename the section of East Third Street where the church is located as "Leon Russell Road."

In 2016 the building was purchased by Tulsa entrepreneur Teresa Knox and her husband Ivan Acosta, who expressed their intention to renovate the building (a process that was expected to take two years), seek registration on the National Register of Historic Places, and use it as a recording studio and community facility. 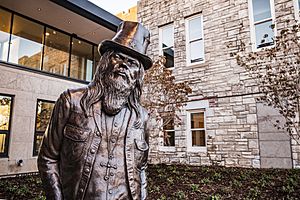 In 2022, after five years of renovation, The Church Studio reopened to the public on March 1, 2022, the 50th anniversary of Leon Russell's purchase of the building. The facility serves as a tourist attraction and includes a recording studio, concert and event venue, home of The Church Studio Archive, and audio engineering school. A series of highly curated concert events included performances by Bill Champlin and Kenny Loggins. Various musicians and bands have visited the newly-restored recording studio, which offers both analog and digital recording techniques, including Joe Bonamassa, 38 Special, Air Supply, Tommy Emmanuel, and Ray Wylie Hubbard. In 2022, Dropkick Murphys recorded their album, This Machine Still Kills Fascists, at the studio. The lyrics on the album are written by Oklahoma native Woody Guthrie.

A life-sized bronze statue of Leon Russell as he appeared in 1972 when he purchased the church, including his Wrangler denim jacket, snake-skinned boots, cross necklace, and signature top hat, stands at the new entrance of The Church Studio. The statue, which took three years to complete, was created by artist Jim Franklin of Perry, Oklahoma, was commissioned by Teresa Knox, who also owns the copyright.

The building was listed on the National Register of Historic Places in 2017 due to its significance to American music culture and being the heart of the Tulsa Sound.

All content from Kiddle encyclopedia articles (including the article images and facts) can be freely used under Attribution-ShareAlike license, unless stated otherwise. Cite this article:
The Church Studio Facts for Kids. Kiddle Encyclopedia.