The Coral Island is a children's television series, adapted from the 19th-century novel The Coral Island by Scottish author R. M. Ballantyne. The series of 9 episodes was a joint production of the Australian Broadcasting Corporation and Thames Television. It was filmed on location in the western Samoan village of Salamumu and then on the Whitsunday Islands off the Queensland coast in 1981.

The series was first broadcast in Australia on ABC-TV on 6 January 1983.

The story, set in 1840, centers on 3 boys from England and their struggle for survival when they are shipwrecked on a remote Pacific island. Jack (played by Scott McGregor), Peterkin (played by Nicholas Bond-Owen) and Ralph (played by Richard Gibson) must learn to survive on their own on the island, despite their very different characters and backgrounds. After befriending two natives on the island, they are rescued by an English missionary team, and both the boys and the two natives return to England. 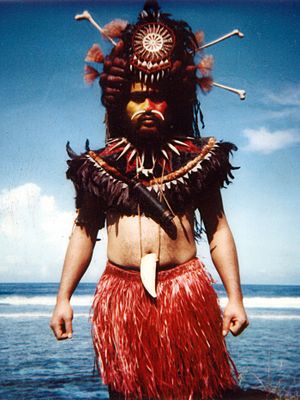 Uelese Petaia — in the role of the native Tararo

All content from Kiddle encyclopedia articles (including the article images and facts) can be freely used under Attribution-ShareAlike license, unless stated otherwise. Cite this article:
The Coral Island (TV series) Facts for Kids. Kiddle Encyclopedia.