The Culinary Institute of America at Greystone facts for kids

The campus' primary facility is a 117,000-square-foot (10,900 m2) stone building, known as Greystone Cellars and built for William Bowers Bourn II as a cooperative wine cellar in 1889. Hamden McIntyre designed the gravity flow winery along with other wineries of the decade. The building changed ownership several times, and was notably owned by the Christian Brothers as a winery from 1945 to 1989. It was used as a winery until its sale to the school in 1993, and was added to the National Register of Historic Places in 1978. 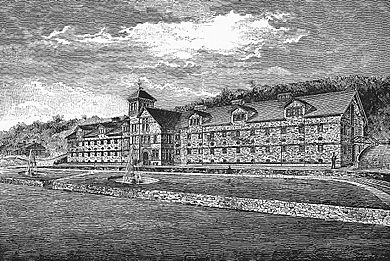 The Greystone campus is situated in and around the Greystone Cellars building, which William Bowers Bourn II conceived as a business concept. His father, William Bowers Bourn Sr., was wealthy from ownership of the Empire Mine gold mine, as well as co-ownership of a shipping company. Bourn II was a businessman with business interests and residences around California, although he had spent his summers during his youth at White Sulphur Springs Resort in St. Helena, before his parents bought Madroño, an estate in the town.

Around the 1880s, San Francisco wine dealers were purchasing wine from Napa Valley vintners at low prices (sometimes around 15 to 18 cents per gallon). The dealers had facilities to store and age wines that most Napa Valley vintners lacked, and thus were able to purchase wine from the vintners at low prices. Because of this, Bourn began a campaign to build the cooperative winery; he was in his early 30s at the time. He created a business partnership with another businessman, E. Everett Wise, who was of a similar age. Bourn then asked for support within the Napa County wine industry. Bourn met with Henry Pellet, president of the St. Helena Vinicultural Club, who endorsed the idea and encouraged his associates to do the same. Bourn and Wise ended up gathering enough support from the local wine industry, and they hired George Percy and Frederick F. Hamilton of the San Francisco architectural firm Percy & Hamilton to design the Greystone Cellars, along with Italian stonemasons to build the façades, and the Ernest L. Ransome firm to handle concrete work. The plans involved the use of new materials and technology of the time, including the relatively new Portland cement. The cement was used as mortar and also poured over the iron reinforcing rods built within the first and second floor elevations. The heavy timber construction of the third floor provided structural support for not only that floor's cask, barrel and bottle aging space but also for the gravity-flow crushing area located on the floor above. The architects planned for the cellars to hold two million gallons of wine at a time, with thirteen tunnels in the hillside behind the building to hold another million gallons. Those tunnels collapsed due to effects of water seepage and of the 1906 San Francisco earthquake.

A large number of men were hired for the building's construction, and local workers were chosen over non-locals. During the construction, many of the workers lived in tents beside their worksite, and cooked meals and stayed there when not working. The cornerstone was laid on June 15, 1888; beneath it was laid several bottles of wine, a copy of a St. Helena Star and San Francisco newspapers, and foreign and rare coins. The building, called the Bourn & Wise Wine Cellar, was completed around June 1889, along with a distillery north of the building and a superintendent's house to the south. In September of that year Everett Wise became too ill to work and sold his share in the winery to Bourn, who between that time and 1890 named the winery Greystone Cellars.

The building cost $250,000 ($5.91 million in 20182018). At its completion, architect George Percy described Greystone Cellars as the largest wine cellar in California, if not the world. Greystone was also the first California winery to be operated and illuminated by electricity, produced by a boiler and gas generator located in a mechanical room below the building's central front wing. In the spring of 1894, a long-lasting phylloxera scourge made Bourn decide the winery was no longer profitable. 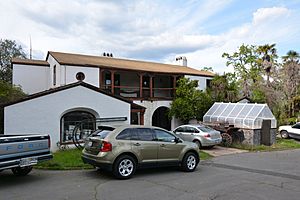 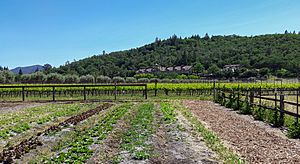 Greystone from its farms at the Charles Krug Winery

He sold the building at a low price that year, to Charles Carpy, who deeded the property to the California Wine Association. The association continued using the Greystone Cellars wine label. A year later, the Bisceglia brothers of San Jose purchased Greystone where they produced sacramental wine under the same label until 1930, and again beginning in October 1933. The Carpy family maintained part of the land, including a Victorian house nicknamed Albert's Villa south of the winery. The house burned down around 1929 and was replaced with a Spanish-style house that is now owned by the school.

In 1993, Heublein sold the property at about 10 percent of its $14 million ($20.6 million in 20182018) valuation, $1.68 million ($2.48 million in 20182018), to the Culinary Institute of America, which used $15 million ($22.1 million in 20182018) to renovate the building and give it a seismic retrofit. After completing the work in August 1995, the school established the property as a branch campus. After initially offering certificate courses, in autumn 2006, the campus began offering associate degrees. In 2015, the college put in motion plans to purchase a portion of Copia, a museum in downtown Napa that operated from 2001 to 2008. The college intends to open a campus, the Culinary Institute of America at Copia, which will house the CIA's new Food Business School. The school, which was outgrowing the Greystone campus, purchased the northern portion of the property for $12.5 million (it was recently assessed for $21.3 million). 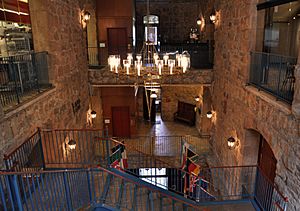 Central stairwell and hallways in Greystone

The Greystone Cellars building stands on a terraced hillside site on the west side of 29/128, about a mile north of St. Helena's central business district. It has 117,000 square feet (10,900 m2), three stories, and a basement, and is around 400 feet (120 m) long, 76 feet (23 m) wide, and 66 feet (20 m) tall, with 22-inch (56 cm) thick walls. As a wine cellar, it held 3.5 million gallons. The building was designed in the Richardson Romanesque style, with an arched entranceway and tower, stone mullions and transoms, a low sweeping roof, well-fitted stonework, and a large and simple stone façade. The building's exterior is made of local light gray volcanic stone put together with Portland cement; the trimmings are of a red stone. Bourne had insisted that gray stones were used in the east façade of the building (its main façade), with darker or other colored stones usable for the other sides of the building. The roof originally used black slate roof tiles.

The building has a front projection measuring 50 by 20 feet (15 m × 6.1 m), which held the main entranceway and an office and sample room. The former office has walls and ceilings of quartered oak, and includes a stone fireplace and vault door. The former sample room has paneled mahogany walls and ceilings, a parquet floor, open bottle racks on walls, and two lockers of mahogany. The windows are polished plate glass with stained glass transoms. The tasting and sales rooms are still preserved in their original form. The projection also includes a 20-by-20-foot (6.1 m × 6.1 m) stone tower that extends one story above the roof and was built to hold a large water tank. A driveway wraps around the front and back of the building, where it is nearly level with the third floor.

The interior has two distinct wings with a large hallway between them, originally with an iron staircase and a hydraulic ram elevator both leading to the third floor. Each side of the hallway on each floor had three doors 8 feet (2.4 m) wide. 4-inch (100 mm) iron pipes were placed through the walls and floors every thirty feet in order to pipe wine from one part of the building to another, and into and out of the building.

Property changes since the original construction include the front terrace, entranceway and landscaping. The former front lawn and flower beds were paved over, and a new driveway was cut into the stone wall north of the original large stone arch over the first driveway.

The primary school building is the Greystone Cellars building, which houses teaching kitchens, the Wine Spectator Greystone Restaurant, the Bakery Café by illy, the Spice Islands Marketplace (the campus store), the De Baun and Ecolab Theatres (auditoriums and cooking demonstration facilities, also used as lecture halls), and administrative offices. Adjacent to the teaching kitchens is the Margie Schubert Library. 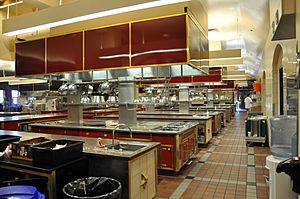 The 15,000-square-foot (1,400 m2) teaching kitchens at Greystone are on the third floor of the primary building. The space was designed without interior walls in order to facilitate ease of movement and open exchange of ideas. The kitchens vary from common stainless steel commercial kitchens by using materials including granite, stone, tile, and wood. The kitchens use Bonnet stoves and have a variety of cooking appliances, including rotisseries, appliances for induction cooking, a stone hearth oven, convection ovens, combi steamers, French tops, and numerous large mixers. The baking and pastry kitchen has 16-foot (4.9 m) flecked granite and solid oak tables for pastry and dough preparation.

On the first floor, the 5,000-square-foot (460 m2) Viking Teaching Kitchen is designed for 36 to 40 students at a time. Its appliances and equipment were donated by Viking Range Corporation's founders and installed as part of a comprehensive redesign of the building's first floor in 2010. The redesign also involved the completion of a chocolate-making facility and the campus store and Flavor Bar. 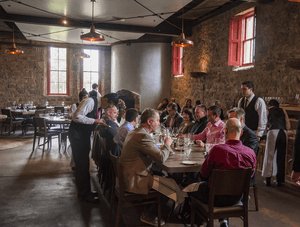 The Gatehouse Restaurant, staffed by the school's degree program students, is a casual restaurant serving contemporary food with local ingredients. The Bakery Café by illy is run by Baking and Pastry Arts Certificate students. The café has sandwiches, salads, soups, and fresh pastries and breads, and also serves coffee, espressos, and teas.

Two former restaurants operated at the campus: the Conservatory Restaurant was led by students of the Farm-to-Table concentration in the CIA's bachelor's degree programs. The Wine Spectator Greystone Restaurant (WSGR) was run by students in the associate degree program in culinary arts. The restaurant focused on using local and seasonal ingredients, and the dining room had open cooking stations to give diners a full view of the working kitchen. The WSGR initially served food of the Mediterranean cuisines, and was at first professionally run. Later on, it became fully student-run, however changes in late 2015 led to lunch service staffed by students and dinner service staffed by employees. The restaurants closed around 2016 with the campus' reorganization after purchasing Copia.

The campus' newest residence hall, Vineyard Lodge II, was built around 2009 as the campus expected to double its enrollment. The building has two-stories, 31 dorm rooms, a kitchen, an activity room, an outside deck and two manager's rooms. The school planned for an environmentally-oriented dormitory, with solar panels to cover some of the building's electrical needs, as well as a membrane system for waste water. The building also has board and batten siding, which lasts longer than wooden siding. The building, on Pratt Avenue in St. Helena, is the first building in the city to be metal-framed rather than wood-framed, to better prevent termites, mold, and fire. The school estimated costs of $4 million for a Napa-based construction company to construct the building. The company demolished a 1,750-square-foot (163 m2) laundry and facilities building in what was described as a green-oriented process. At the time of construction, the school annually enrolled 104 students; the new residence hall would allow the campus to enroll another 100 students. 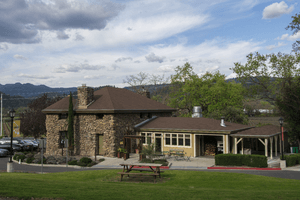 The Williams Center for Flavor Discovery

All content from Kiddle encyclopedia articles (including the article images and facts) can be freely used under Attribution-ShareAlike license, unless stated otherwise. Cite this article:
The Culinary Institute of America at Greystone Facts for Kids. Kiddle Encyclopedia.