The Dreamstone facts for kids

Kids Encyclopedia Facts
This page is about the British animated TV series. For the C. J. Cherryh novel, see The Dreamstone (novel).

The Dreamstone was a British animated television series that ran for 4 series of 13 episodes each between 1990 and 1995. The original concept and artwork were created by Michael Jupp and the series was written by Sue Radley and Martin Gates. The series was produced by Martin Gates Productions (MGP) for a wholly owned subsidiary of Central (a part of Independent Television) and FilmFair. All the current distribution rights for the Martin Gates catalogue is owned by Monster Entertainment.

The Dreamstone is set in an alternative world called "The Land of Dreams", and concerns itself principally with the struggle between good (personified by The Dream Maker, a Merlin-esque white magician), and evil (personified by Zordrak, Lord of Nightmares).

The Land of Dreams is populated by Noops (the humanoids of the land, who live and work like humans) and Wuts (the defenders of the land, who fly around on leaves and ward off Zordrak's evil forces with staffs that have orbs of light attached to them, through which they communicate). 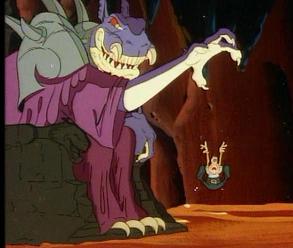 Zordrak, Lord of Nightmares, first appeared in the pilot episode.

The Land of Nightmares, also known as the dark side of the planet, is populated mostly by Urpneys, who basically resemble lizard-like human beings except for the large bulbous nose and pointy tails. They live in Viltheed, a tall black mountainous wasteland in which resides Zordrak. Although all the Urpneys in Viltheed are male, female Urpneys do exist, as Urpgor has both an auntie and a niece.

The Dreamstone aired between 1990 and 1995 with a total of 52 episodes. Each episode has a similar plot: Zordrak instructs his henchmen to steal the Dreamstone, which he plans to destroy, so that nightmares will plague the sleeping world. The plan usually involves Urpgor, his right-hand man and scientist inventing some means with which the Urpneys, led by Sergeant Blob who is an archetypal Sergeant Major type, crosses the Mist of Limbo (a vast Purple Mist) to get to the Land of Dreams. The plan invariably fails, the main problem being the cowardice and incompetence of the Urpneys, who often want no more than to 'go home' and get some sandwiches.

Compared to the more tense and action focused pilot episode, the rest of the show increasingly favoured more laid back, slapstick focused story lines. In earlier episodes, the lead heroes, Rufus and Amberley, usually had an underplayed role compared to the Urpneys and their own comrades, the Wuts and the Dream Maker, who often ultimately dealt with the Urpneys' schemes, though later episodes depict the Noops as more savvy and comedic characters, and expand the series' formula to give them more central focus, often tasked with an errand by the Dream Maker, while also trying to avoid the Urpneys' blundering interference. As such, the stories also started to branch into having new locales and characters get caught in the middle of the two sides' rivalry, over the usual transitioning between the two sides of the Sleeping World earlier on.

The show was notable for its musical score, which is practically unique among cartoons in that it was performed by a full-size professional orchestra, namely the London Philharmonic Orchestra. The score, by Mike Batt, was heavily characterised by the use of leitmotifs and thematic variations, particularly on the two main songs used in the series, Better than a Dream (characterising the Noops & Wuts) and War Song of the Urpneys (characterising the Urpneys).

Ozzy Osbourne, Frank Bruno, and Billy Connolly provided lead vocals on the War Song of the Urpneys single and album track, although the version heard in the series was largely sung by composer Mike Batt. Other artists who sang for The Dreamstone soundtrack included Bonnie Tyler, who recorded a duet with Mike entitled Into The Sunset. This song was supposed to be used as the show's official love song (especially towards Rufus and Amberley) but it was never used in the show. Plus Joe Brown and Gary Glitter performed The Vile Brothers Mountain Band, which was used on the show during the episode Albert is Fishnapped.

The TV version of Better Than A Dream contained some different lyrics to the version included on the soundtrack. The TV version mostily reflected Rufus' personality, with the lyrics "i always dream myself to somewhere else each night" and 'i know i dream much more than other people do". The soundtrack version contained "i used to dream myself to someone else each night" and "until i chanced upon this road that led to you", among a few other changes that were made to the song. Mike Batt also re-recorded the chorus, used in the ending credits from the latter part of Series 1 onwards till Series 4 in which was then shortened. In 2012, Katie Melua released a version of "Better Than A Dream".

The soundtrack was re-released as part of the Mike Batt Music Cube released in December 2009 by Dramatico Records. However instead of the TV soundtrack, the CD features 5 newily recorded orchestral overtures, as well as Better Than A Dream, The War Song of the Urpneys and Into the Sunset and a shorter version of The Dreamdance which also omits the vocal clips from the show. The Vile Brothers Mountain Band was also omitted from the soundtrack due to controversy involving Gary Glitter.

The Dreamstone soundtrack is currently out of print as of 2015, however, the 5 Overture tracks from the Music Cube re-release were included on Mike Batt's album; "A Classical Tale", released on CD on 24 July 2015 by Dramatico Records.

In the United Kingdom there were a few video releases from the Video Collection, covering all of Series 1 (including the unedited opening special) bar the episode Megattack; plus several releases of most episodes (but not all of them) from Series 1 from Tring Video UK. BMG Video UK only released one video featuring 4 episodes of Series 2.

The first two episodes were originally combined to form the Opening Special which contained extra footage that was edited out from the 22-minute TV versions of the Opening Special. The first six episodes of this season have been released on DVD in the UK by Abbey Home Media when the rights of the show were owned by Cookie Jar Entertainment. These two volumes are now out of print. The company's old Jaroo website (now closed) used to stream the episodes with five episodes or less on the site at one time, though after five weeks an episode is removed from rotation until the process begins again and Jaroo only had access to the first two series.

In the United States, Fisher Price released a single video of The Dreamstone.

The first series is available in the UK through Amazon Prime, but is missing the final episode of the series; Megattack. Since the end of 2020 however, the episodes are currently no longer available on Amazon. iTunes have also added the first 12 episodes onto their service.

In late 2018, Monster Entertainment started the "Official Dreamstone" channel on YouTube and has uploaded all 52 episodes on that channel. Although since June 2019 they have made most of the episodes set to "private" and only have the first two episodes (the edited Parts 1 & 2 episodes) as well as the two parts put together into a "Full Version" available to view, despite that the missing scenes are still missing. They are slowly making the other episodes available to view on the site. As of January 2020 they all have been re-uploaded.

Although the show was made in the United Kingdom, the cartoon itself was drawn in the Philippines. As with American produced cartoons, Martin Gates Productions used foreign studios for the overall animation work. Fil-Cartoons, owned by Hanna-Barbera, was utilized for series 1, while Moving Images International animated for series 2–4. (MII also animated most of Martin Gates' other productions throughout the 1990s, as well as other FilmFair productions such as Brown Bear's Wedding, White Bear's Secret, and much of series 1 of The Legends of Treasure Island. Fil-Cartoons who animated the first series of The Dreamstone would later be used to animate series 2 of The Legends of Treasure Island).

In 1985, Mike Jupp and Martin Gates produced a pilot for the series entitled The Dream Thief. It was animated by the studio Mill Valley Animation in Novato in the US state of California when Mike was working in America. In this short pilot there were a few alterations to the TV series, most of which came from Jupp's original manuscript for the idea. The short also featured a 12-year-old Christian Bale as the voice of Rufus, whom Martin Gates would latter work on with for Steven Spielberg's WWII film Empire of the Sun where Martin was the dialog coach for Christian's character in his acting debut.

In 1991 London Edition published a comic book series based on episodes from the cartoon. The first issue consisted entirely of screenshots whilst the next five featured art drawn for the comics by Tim Perkins. The comics only ran six issues and took their plotlines straight from the following episodes: The Dreamstone/Into Viltheed, The Daydream Bubble, Albert is Fishnapped, The Knitted Balloon, The Shrinking Stone and The Invisible Blob.

BMI (Print Division) Ltd released a board game based on The Dreamstone in 1993. The box proclaimed that it contained two games in one- The Dreamstone Game (involving rolling to move and collecting pieces of the Dreamstone) and Dream Chase (a variant on Snakes and Ladders. Neither were particularly original and the game was not a best-seller. A jigsaw showing the Dream Maker, Rufus, Amberley and Albert walking through the Noops' town was also produced, along with a few other puzzles produced by British puzzle/board game manufacturer; Waddingtons.

In October 2019 Oakbound Studio announced that it was working on a licensed miniatures range and game based on The Dreamstone to mark the 30th anniversary of the show. This project is advertised as launching on Kickstarter on the 1st July 2020 and contains a roleplaying game (RPG), miniatures game and range of 27 initial collectable figurines based on the show.

All content from Kiddle encyclopedia articles (including the article images and facts) can be freely used under Attribution-ShareAlike license, unless stated otherwise. Cite this article:
The Dreamstone Facts for Kids. Kiddle Encyclopedia.