The Goblin and the Grocer facts for kids 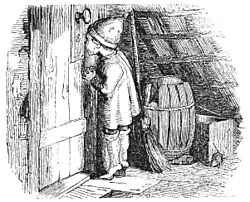 "The Goblin at the Grocer's" (Danish: Nissen hos Spekhøkeren) is a fairy tale published 1852 by Danish author Hans Christian Andersen, about a goblin (nisse) who must choose between poetry or his Christmas porridge from a grocer.

Andrew Lang included the tale as "The Goblin and the Grocer" in The Pink Fairy Book (1897).

The spekhøkeren does not mean just "grocer" but a materialistic "Philistine" as well, and he uses pages ripped out of a precious book of poems to wrap merchandise such as cheese. Hence the alternate title "The Goblin and the Huckster".

An English translation of the tale with the title "The Goblin and the Grocer" was included in Andrew Lang's anthology, The Pink Fairy Book (1897).

The story was translated to English as "The Goblin and the Huckster" by Mrs. Paull (1867). The same title was adopted by H. W. Dulcken (1869) in his translation, and by J. H. Stickney in 1886, who reproduced the illustrations by Vilhelm Pedersen, reissued in 1915 with artwork by Edna F. Hart.

The tale was also translated as "The Brownie at the Butterman's" by H. L. Brækstad (1900), and "Nis at the Cheesemonger's" by Anne S. Bushby.

Once, a student lived in an attic while a grocer lived on the first floor with a nisse, or house goblin. Because the grocer treated the nisse for Christmas with a dish of porridge (Danish: fad grød) with a large lump of butter in the middle, the nisse was attached to the grocer. One day, the student came to buy cheese and candles; then he discovered that his cheese was wrapped in a page from a poetry book, so he bought the book instead of the cheese, and joked that the grocer knew nothing about poetry. The goblin, offended by the joke, used magic to make everything in the room speak and they all agreed that poetry was useless. The goblin went to tell the student, but he saw a beautiful, marvelous tree of light in the student's room, the most splendid thing he had ever seen. He kept going back to watch the tree of light through the peephole, but could not stay there, for the grocer gave him jam and butter. One day when there was a fire, the red-capped nisse ran to save the poetry book, and realized that he thought the book the greatest treasure in the house. Still, he decided to divide his time between the grocer and the student, because the student provided no Christmas porridge (Julegrød).

All content from Kiddle encyclopedia articles (including the article images and facts) can be freely used under Attribution-ShareAlike license, unless stated otherwise. Cite this article:
The Goblin and the Grocer Facts for Kids. Kiddle Encyclopedia.