The Humps facts for kids

The Humps is a granite rock formation known as a "stepped bornhardt inselberg". It is located within The Humps Nature Reserve approximately 295 kilometres (183 mi) east of Perth and 17 kilometres (11 mi) north east of Hyden in the eastern wheatbelt region of Western Australia. 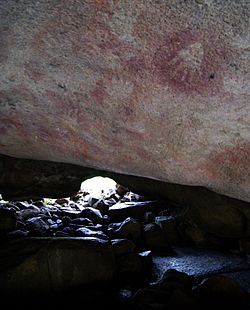 On the north-eastern edge of The Humps is Mulka's Cave, also known as Bate's Cave. The cave contains over 450 hand prints and images made by Aborigines. Most sites of Aboriginal art in the region contain fewer than 30 motifs. While visitation has damaged the site, mitigation strategies put into place appear to have arrested further damage. Mulka's Cave is protected under the Aboriginal Heritage Act. It is also both a Protected Area and listed on the Register of the National Estate.

Water run-off from The Humps is directed into the Hyden Humps Dam reservoir. The reservoir is situated approximately 200 metres (660 ft) south of The Humps.

All content from Kiddle encyclopedia articles (including the article images and facts) can be freely used under Attribution-ShareAlike license, unless stated otherwise. Cite this article:
The Humps Facts for Kids. Kiddle Encyclopedia.