The Joker is a steel roller coaster at Six Flags Discovery Kingdom in Vallejo, California. The ride opened on May 29, 2016, as a rebuild of former wooden roller coaster Roar, adding a new steel track on top of Roar's wooden support structure. This hybrid configuration was implemented by Rocky Mountain Construction and is themed to the Joker, a comic book character villain featured in DC Comics publications. The original Roar roller coaster was constructed by Great Coasters International and opened in 1999.

Roar was a roller coaster at Six Flags Discovery Kingdom constructed by Great Coasters International. When it debuted on May 14, 1999, Roar was the park's first wooden roller coaster and one of its first rides overall during the transition of adding amusement park rides to the marine mammal park. The coaster featured a height of 94 feet (29 m), a first drop of 85 feet (26 m) and a top speed of 50 mph (80 km/h).

In July 2015, Six Flags announced that Roar at Discovery Kingdom would be closing on August 16, 2015. Several weeks later on September 3, 2015, plans were revealed to convert the ride into a steel-tracked coaster called The Joker for the 2016 season. The renovation would be performed by Rocky Mountain Construction using the company's patented I-Box steel track technology on all of the original wooden coaster supports. The roller coaster would also receive new trains themed to the Joker comic book character and would feature three inversions, including a new element marketed as a “step-up under-flip inverted roll”.

Based on the success of previous roller coaster conversions in its partnership with Rocky Mountain Construction, Six Flags anticipated that Roar would benefit from the overhaul and transition into The Joker. Discovery Kingdom held a soft opening, a media preview event for The Joker, on May 25, 2016. The roller coaster was well-received and opened for Memorial Day Weekend on May 29, 2016. 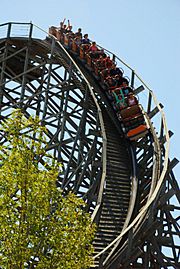 The table below compares the original Roar, with the updated Joker ride. The original ride by the Great Coasters International was an approximately 94 feet (29 m) tall and the length of 3,291 feet (1,003 m). The refurbished ride by Rocky Mountain Construction features a steeper and taller coaster, thus achieving a faster speed.

The Joker's trains are themed to the character widely known in the Batman comics. Each train has six cars, each seating four people with two across in two rows, for a total capacity of 24 riders per train. As the train departs the station, it enters several small 'bunny hills' and turns, reminiscent of pre-lift elements on Twisted Colossus. The train will then ascend up its first hill of 100 feet (30 m), followed by a curved drop at 78 degrees – re-profiled as a steeper drop from the original Roar coaster. It accelerates to a maximum speed of 53 mph (85 km/h) before entering the "step-up under-flip inverted roll" element.

After turning left out of the inversion, the train goes up a hill into a 180-degree stall featuring several head chopper beams. A wave turn element and several air time hills follow, along with an over-banked turn and two camel back hills. The track winds sharply through another over-banked turn before entering the final inversion, a barrel roll. Finally, the train undergoes another banked turn and airtime hill before reaching the final brake run and returning to the station.

All content from Kiddle encyclopedia articles (including the article images and facts) can be freely used under Attribution-ShareAlike license, unless stated otherwise. Cite this article:
The Joker (Six Flags Discovery Kingdom) Facts for Kids. Kiddle Encyclopedia.