The Lorax facts for kids

The Lorax is a children's book. It was written by Dr. Seuss. It was first published in 1971. The Lorax is a small orange creature. He speaks for the trees against the greedy Once-ler. The book is a fable about industrialized society and the danger it poses to nature. It has been made into a 2012 movie and a 1972 television show. Some people criticized the book. They thought it was gloomy. They thought it was not a good book for children. Some people thought it was unfair to the logging industry.

A young boy living in a polluted world visits a strange creature called the "Once-Ler". The boy asks about the poor state of the world. The Once-ler explains that the world was once beautiful. He made an invention that required him to chop down Trufulla trees. He says that everyone needed his invention. He made a profit from cutting down Trufulla trees. A small orange creature called the Lorax urged him to stop cutting down so many trees. He said that this was harming the environment. The Once-Ler ignored him. Eventually the supply of trees ran out. The land was left polluted. The animals left the forest. The Once-Ler finishes his story. He gives the boy "the last [Truffula seed] of all." He tells him to plant the seed It will grow into a forest. 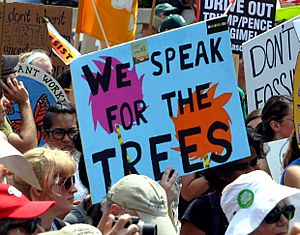 Placard "We speak for the trees", reference to The Lorax, at the People's Climate March (2017).

All content from Kiddle encyclopedia articles (including the article images and facts) can be freely used under Attribution-ShareAlike license, unless stated otherwise. Cite this article:
The Lorax Facts for Kids. Kiddle Encyclopedia.