The Majestic (or Majestic Apartments) is a twin-towered skyscraper housing cooperative located at 115 Central Park West between 71st Street and 72nd Street in Manhattan, New York City. The steel framed building was constructed in 1930–1931 and designed in the Art Deco style by architect and real estate developer Irwin S. Chanin with the assistance of his French associate, Jacques Delamarre. The futuristic sculptures on the building's facade are by Rene Chambellan. 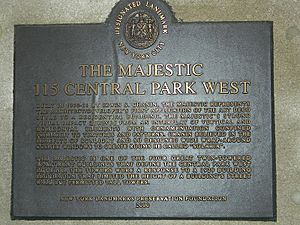 The building was originally planned to be a 45-story hotel, but the plans were changed midway through construction due to the Great Depression and the passing of the Multiple Dwelling Act, which restricted a building's height immediately above the street, but allowed tall towers if the property was sufficiently large. The Majestic replaced the Hotel Majestic, designed by Alfred Zucker in 1894 at the same site, which had been home to Gustav Mahler and Edna Ferber, among others.

The Majestic has 238 apartments in 29 stories, and is one of four buildings on Central Park West which feature two towers, the others being: The San Remo, The Century—also designed and built by Chanin—and The Eldorado.

Among the notable past and present residents of the Majestic are actors Milton Berle and Zero Mostel, and newspaper columnist Walter Winchell. Fashion designer Marc Jacobs lived there as a teenager with his grandmother in the 1980s, and television personality Conan O'Brien sold his co-op in 2010.

The Majestic was home to some of the former heads of the Luciano crime family (later called the Genovese crime family) including Lucky Luciano, Frank Costello, and Meyer Lansky. In 1957, Vincent "The Chin" Gigante shot Frank Costello in the lobby of the Majestic in a failed assassination attempt. Louis "Lepke" Buchalter, a founding member of the New York syndicate, along with Meyer Lansky and Lucky Luciano, and head of its security arm, Murder, Inc., lived in apartment 17J in 1933.

All content from Kiddle encyclopedia articles (including the article images and facts) can be freely used under Attribution-ShareAlike license, unless stated otherwise. Cite this article:
The Majestic (New York City) Facts for Kids. Kiddle Encyclopedia.