The Mill at Sonning facts for kids 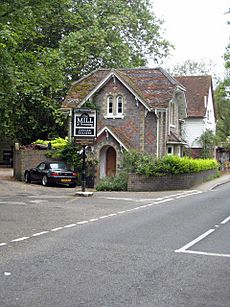 Entrance to the Mill theatre-restaurant in Sonning Eye.

The Mill at Sonning is a theatre and restaurant (or dinner theatre), converted from an 18th-century flour mill, on an island in the River Thames at Sonning Eye in the English county of Berkshire

The river divides into three, with the mill race forming the middle branch, spanned by one of the Sonning Backwater Bridges just downstream of the mill. The original mill was established much earlier and was mentioned in the Domesday Book. During the 19th and early 20th centuries, the mill was owned by the well-known local families of May and Witherington, and it produced flour for Huntley and Palmer biscuits in the nearby town of Reading. More recently, the Mill complex has been converted into a 215-seat air-conditioned theatre, with a restaurant for pre-theatre meals and also a bar, where the original watermill is now exposed to view. Close by is the French Horn hotel, also on the river.

The theatre has a small hydroelectric generator of 18.5 kW capacity, commissioned in June 2005. This was the first such installation on the Thames, predating the one at Windsor Castle. In 1984, the Mill at Sonning was given a conservation award by The Times newspaper and the Royal Institute of Chartered Surveyors for the design, restoration and conversion of the derelict mill into a dinner theatre.

All content from Kiddle encyclopedia articles (including the article images and facts) can be freely used under Attribution-ShareAlike license, unless stated otherwise. Cite this article:
The Mill at Sonning Facts for Kids. Kiddle Encyclopedia.