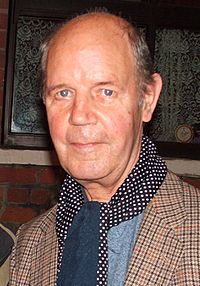 Brian Cant (12 July 1933 – 19 June 2017) was an English actor, television presenter and writer. He was best known for his work in BBC television programmes for children from 1964 until his death in 2017. He was born in Ipswich, Suffolk. He was best known for presenting Play School and for starring as Brian the Farmer in Dapplewood Farm. On 28 November 2010, he received the special award at the Children's BAFTAs for his work in children's television.

Cant died on 19 June 2017 in the London Borough of Hillingdon, England from complications of Parkinson's disease, aged 83.

All content from Kiddle encyclopedia articles (including the article images and facts) can be freely used under Attribution-ShareAlike license, unless stated otherwise. Cite this article:
Brian Cant Facts for Kids. Kiddle Encyclopedia.