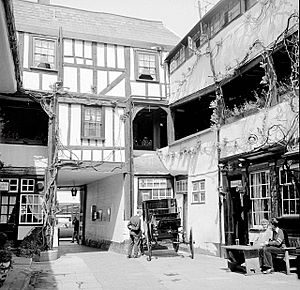 The New Inn looking from the courtyard out. 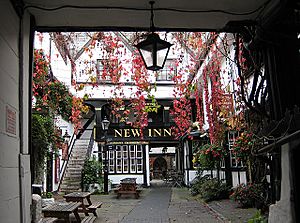 Looking towards the far end of the courtyard.

The New Inn, 16 Northgate Street, Gloucester, England, is a timber framed building used as a public house, hotel and restaurant. It is the most complete surviving example of a medieval courtyard inn with galleries in Britain, and is a Grade I listed building. The announcement of Lady Jane Grey's succession to the British throne was made from the Inn gallery in 1553.

The Inn was built in 1450 by John Twyning, a monk, as a hostelry for the former Benedictine Abbey of St Peter. It is on the site of an earlier inn. After the dissolution of St Peter's the inn passed to the Dean and Chapter of Gloucester Cathedral and was leased to various inn holders until it was sold in 1858. Stories that the inn was built to provide lodgings for pilgrims to the tomb of King Edward II were first recorded in the eighteenth century and may be incorrect.

In 1553, King Edward VI died and Lady Jane Grey was proclaimed Queen from the first floor gallery by the Abbott of Gloucester.

It is thought that William Shakespeare may have performed at the Inn with his company The Lord Chamberlain's Men as it is known that the company did visit and perform in the city. Inns were often used for theatrical performances in England (Inn-yard theatre) and Spain (Corral de comedias).

The Inn is entered through a carriage way from Northgate Street, and is the most complete surviving example of a medieval courtyard inn with galleries in Britain.

Close to the entrance to the Inn in Northgate Street lies New Inn Lane, which runs parallel to Eastgate Street and The Oxbode. Reportedly, it was originally called Pilgrims Lane.

Today the Inn is a restaurant, pub and 36 bedroomed hotel. There is also a coffee shop and a nightclub which is open most Saturdays.

The Inn is supposedly haunted with one unexplained event captured on CCTV in 2010.

All content from Kiddle encyclopedia articles (including the article images and facts) can be freely used under Attribution-ShareAlike license, unless stated otherwise. Cite this article:
The New Inn, Gloucester Facts for Kids. Kiddle Encyclopedia.