The Nutcracker (1993 film) facts for kids

The film was released by Warner Bros. under their Warner Bros. Family Entertainment label on November 24, 1993, four days after director Ardolino died. It received mixed reviews and grossed $2,119,994.

The film follows the traditional plot of the Nutcracker. 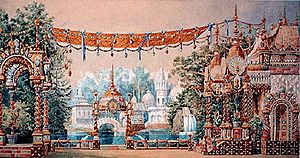 Konstantin Ivanov's original sketch for the set of The Nutcracker (1892)

It is Christmas Eve. Family and friends have gathered in the parlor to decorate the beautiful Christmas tree in preparation for the party. Once it is finished, the children are sent for. They stare in awe at it sparkling with candles and decorations.

The party begins. A march is played. Presents are given out to the children. Suddenly, as the owl-topped grandmother clock strikes eight, a mysterious figure enters the room. It is Herr Drosselmeyer, a local councilman, magician, and Clara's godfather. He is also a talented toymaker who has brought gifts for the children, including four lifelike dolls who dance to the delight of all. He then has them put away for safekeeping.

Clara and her brother, Fritz, are sad to see the dolls being taken away, but Drosselmeyer has yet another toy for them: a wooden nutcracker carved in the shape of a little man. The other children ignore it, but Clara immediately takes a liking to it. Fritz, however, breaks it, and she is heartbroken.

During the night, after everyone else has gone to bed, Clara returns to the parlor to check on her beloved nutcracker. As she reaches the little bed she put it on, the clock strikes midnight and she looks up to see Drosselmeyer perched atop it. Suddenly, mice begin to fill the room and the Christmas tree begins to grow to dizzying heights. The nutcracker also grows to life size. Clara finds herself in the midst of a battle between an army of gingerbread soldiers and the mice, led by their king. They begin to eat the soldiers.

The nutcracker appears to lead the soldiers, who are joined by tin soldiers, and dolls who serve as doctors to carry away the wounded. As the Mouse King advances on the still-wounded nutcracker, Clara throws her slipper at him, distracting him long enough for the nutcracker to stab him.

The mice retreat and the nutcracker is transformed into a handsome Prince. He leads Clara through the moonlit night to a pine forest in which the snowflakes come to life and dance around them, beckoning them on to his kingdom as the first act ends.

All content from Kiddle encyclopedia articles (including the article images and facts) can be freely used under Attribution-ShareAlike license, unless stated otherwise. Cite this article:
The Nutcracker (1993 film) Facts for Kids. Kiddle Encyclopedia.