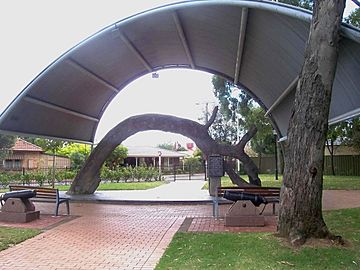 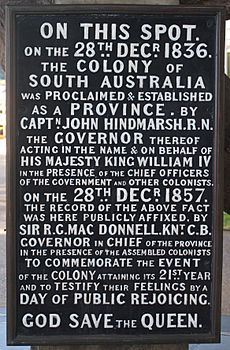 The Old Gum Tree (also known as The Proclamation Tree) is a historic site in Glenelg North, South Australia. Near this tree on 28 December 1836, the British governor John Hindmarsh delivered the proclamation announcing the establishment of Government of the colony of South Australia. A ceremony is held each year at the site on Proclamation Day, with the current Governor reading out Hindmarsh's original speech.

The tree itself, probably a red gum, had died by 1907. Its decayed outer surface was encased in concrete in 1963.

All content from Kiddle encyclopedia articles (including the article images and facts) can be freely used under Attribution-ShareAlike license, unless stated otherwise. Cite this article:
The Old Gum Tree Facts for Kids. Kiddle Encyclopedia.