Glenelg North is a seaside suburb of Adelaide, South Australia. It is located in both the City of Holdfast Bay and the City of West Torrens.

The majority of residents (72.9%) are of Australian birth, with the other common census response being England (7.6%).

The local newspaper is the Guardian Messenger. Other regional and national newspapers such as The Advertiser and The Australian are also available. 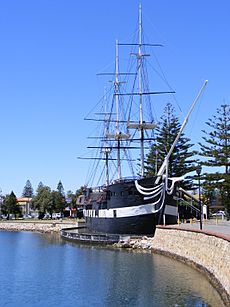 Glenelg North is the site of the Patawalonga boat haven and The Old Gum Tree.

It is also home to a replica of the vessel HMS Buffalo, the ship that brought settlers to the state. The replica is fitted out as a restaurant.

The Jetty Road shopping and dining precinct is a short walk from the suburb.

There are parks and green spaces throughout Glenelg North.

Glenelg North Beach extends along the coastal length of the suburb.

The suburb is serviced by the following main roads:

The suburb is serviced by bus routes, run by the Adelaide Metro:

All content from Kiddle encyclopedia articles (including the article images and facts) can be freely used under Attribution-ShareAlike license, unless stated otherwise. Cite this article:
Glenelg North, South Australia Facts for Kids. Kiddle Encyclopedia.