Kids Encyclopedia Facts
This page is about the Local Government Area. For the geographical feature, see Holdfast Bay. 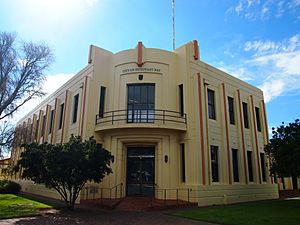 The City of Holdfast Bay is a local government area in the south-western coastal suburbs of Adelaide, South Australia.

The council was formed 1 January 1997, when the City of Glenelg and City of Brighton councils were amalgamated by the state government. As a result, there are two council offices, one in the historic Glenelg Library on Colley Terrace and the other on Jetty Road, Brighton.

The council is split into four ward divisions from which three councillors are elected to represent the area (excluding the mayor). They are the Glenelg Ward, Somerton Ward, Brighton Ward and Seacliff Ward.

There is one Sister city to Holdfast Bay.

All content from Kiddle encyclopedia articles (including the article images and facts) can be freely used under Attribution-ShareAlike license, unless stated otherwise. Cite this article:
City of Holdfast Bay Facts for Kids. Kiddle Encyclopedia.