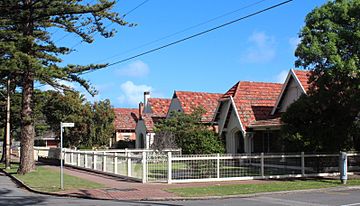 Glenelg East is a residential suburb 9 kilometres (5.6 mi) south west of the centre of Adelaide, South Australia. It is characterised by quarter-acre blocks with heritage homes and parks intermingled with contemporary modern homes and low-rise multi-dwelling units.

Glenelg East is bordered by Anzac Highway to the north, Cliff Street to the south. Brighton Road is to the west and Buttrose Street to the east.

View to north east from Glenelg Oval, Glenelg East and Norfolk Pines along tramline in the background

The Glenelg Oval is a well-used cricket and Australian Rules Football venue that is the home ground for the SANFL Glenelg Football Club.

The suburb is a popular with cycling enthusiasts who rendezvous at a local coffee shop prior to weekend rides through Adelaide's beach suburbs.

The Holdfast Bay City Development Plan zones Glenelg East primarily for single storey residential, a second story being allowed where compatible with existing buildings. The plan specifies that residential site sizes are maintained in excess of 600m2 maintaining the lower density that residents seek. A feature of the development plan is also its focus on Heritage Conservation Zones, one of which is within the suburb surrounding Da Costa Park. The Heritage Conservation seeks to preserve certain styles of residential homes that are common in Glenelg East. The styles originate in overlaping periods as follows;

Original and restored examples of building styles from these periods are found throughout the suburb today and particularly in the streets surrounding the Da Costa Park Heritage Conservation Zone. The Tudor Revival and Californian Bungalow styles that were built in the Inter War period are the most prevalent, while a few examples of Federation Homes also found.

Within the suburb is Glenelg Primary School and within walking distance in neighbouring suburbs are two private schools St Peter's Woodlands and Immanuel College. 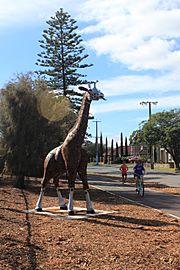 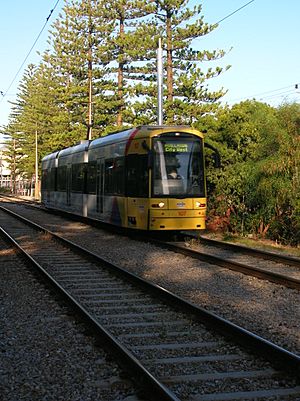 Glenelg East has access to main roads adjacent to the suburb. Travel times by car to the Adelaide CBD and the Adelaide Airport are about 25 and 15 minutes respectively. The suburb is well serviced by bus routes along Anzac Highway and Brighton Road. The Glenelg tram, which runs through Glenelg East, has four stops within the suburb. Trams at 15-20-minute intervals take about 25 minutes to the city and 50 minutes to the Adelaide Entertainment Centre. The service was first opened in August 1873 as the South Terrace railway line. It was taken over by the Municipal Tramways Trust and started operation as an electrified tramway on 14 December 1929.

The Mike Turtur Bikeway alongside the tramline makes commuting by bike popular on a sealed off-road bikeways and on secondary roads within the suburb. 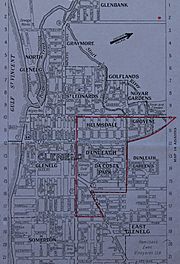 On 23 November 1947 Glenelg Council formed the area in its present form by combining the areas of Grovene, Helmsdale, Dunleath and Da Costa Park. Grovene was originally part of the City of West Torrens, while Da Costa Park was taken over from the Marion District Council. It was felt that residents of these areas would be better served by the Glenelg Council due to its close proximity. The former suburbs were amalgamated and renamed Glenelg East, Glenelg, Glenelg North and Glenelg South.

Original residential development was the result of Glenelg expanding and in about 1911 land was divided and sold in the area originally known as Helmsdale. This area was situated to the east of Brighton Road, west of Sixth Avenue and between the Anzac Highway and the Glenelg Tramline. Later, between 1925 and 1926 land in Dunleath, since incorporated into Glenelg East, and located south of the Glenelg Tramline to Farr Terrace, was released for residential development. On being released, land was in demand with reports of 85 blocks being sold in a morning for a total of £24,067, with properties fronting Brighton Road selling for double the price of other allotments. A second portion of Dunleath was released in January 1946 by Miss Charlotte I. Sandison, of Glenelg and the estate of her sister. Miss Sandison and her sister had inherited the land from Mr. E. L. J. McHenry son of Dr. McHenry, the original owner. As Mr McHenry had no descendants and the Sandison's family had been tenants on the property 87 years prior, the land was willed directly to the sisters.

All content from Kiddle encyclopedia articles (including the article images and facts) can be freely used under Attribution-ShareAlike license, unless stated otherwise. Cite this article:
Glenelg East, South Australia Facts for Kids. Kiddle Encyclopedia.