Kids Encyclopedia Facts
For the city in Britain, see Brighton.

Brighton is a coastal suburb of Adelaide, South Australia, situated between Seacliff and Glenelg and aside Holdfast Bay. Some notable features of the area are the Brighton-Seacliff Yacht Club, the Brighton Surf Lifesaving Club, the Brighton Jetty, and a beach. The Windsor Theatre constructed in 1925 is a long-standing institution, showing cinema to the locals usually two films per night. 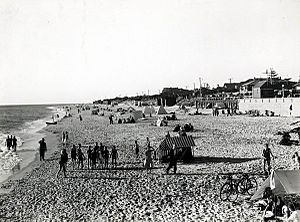 People on the beach at Brighton in South Australia in 1930.

The first Brighton Town Hall was built in 1869 and was just the fourth Town Hall built in the colony of South Australia. The architect and builder was George William Highet who arrived in the colony in 1836. G. W. Highet served as a town clerk and Councillor and died in Brighton aged 80 years. The hall was constructed of stone from Ayliffe’s quarry in the Adelaide Hills laid on concrete foundations. It was used as the civic centre of the City of Brighton from 1869 until 1936 when it was then leased by the RSL.

Brighton was the home of Australian geologist, Antarctic explorer and academic Sir Douglas Mawson. He was buried at Saint Jude's Anglican church in the town.

Brighton has a large sandy beach which is patrolled by the Brighton Surf Lifesaving Club on Weekends and Public Holidays between November and March. Brighton Beach is popular for Adelaide beach goers as it is relatively safe - currently rated as Least Hazardous by Surf Lifesaving.

A "Stormy Session" by the Brighton jetty

A sand replenishment program has been in operation for many years resulting in the beach sand dunes gradually increasing through the program of replacing eroded sand and replanting of the dunes with plants and grasses.

In summer, a sandbar normally forms in the water which can produce waves on windy days. Brighton is well known by local surfers for producing messy but fun 'stormy sessions'.

The Esplanade is an area of prime real estate which has been transformed over the years from a street of old cottages to new modern town houses which can fetch up to $AU4 million.

Brighton's Jetty Road runs perpendicular to the Esplanade and is home to many restaurants, cafes and the local hotel, known as "The Esplanade", or "Espy".

The first Brighton Jetty was built in 1886 and weathered the sea and storms for over 100 years. The Brighton jetty was badly damaged by winter storms in the 1994. The jetty was rebuilt using funds supplied by a mobile phone (cell phone) service provider, hence the tower on the end of the jetty.

In 1926 the women of Brighton erected a drinking fountain near the entrance of the jetty to commemorate the death of Kathleen Duncan Whyte, who was fatally attacked by a shark while swimming. Kitty was the daughter of Rev. Maculley and taught swimming at Brighton for many years. In 1919 Kitty saved a swimmer from drowning and was awarded a Grand Diploma by the Royal Life Saving Society.

At the shore end of the jetty is a War Memorial arch. Here, traditional Dawn Services are held annually on Anzac Day to commemorate fallen service men and women.

Although called Adelaide Brighton Cement, the cement works are actually located in the nearby suburb of Marino.

All content from Kiddle encyclopedia articles (including the article images and facts) can be freely used under Attribution-ShareAlike license, unless stated otherwise. Cite this article:
Brighton, South Australia Facts for Kids. Kiddle Encyclopedia.