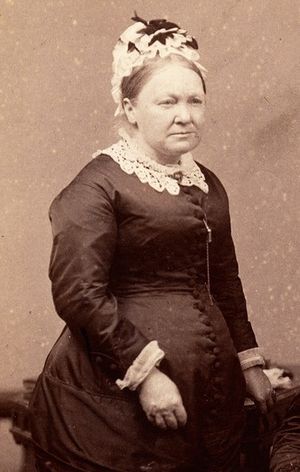 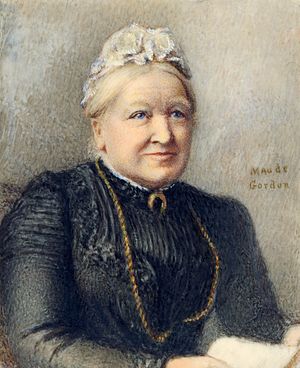 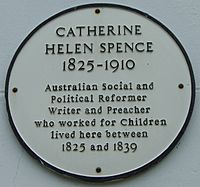 A wall plaque at the Townhouse Hotel in Melrose, Scotland. Spence lived the first 14 years of her life in a building which is now part of the hotel. 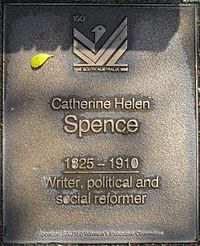 Plaque on the Jubilee 150 Walkway.

Catherine Helen Spence (31 October 1825 – 3 April 1910) was a Scottish-born Australian author, teacher, journalist, politician, leading suffragist, and Georgist. Spence was als a minister of religion and social worker, and supporter of electoral proportional representation. In 1897 she became Australia's first female political candidate after standing (unsuccessfully) for the Federal Convention held in Adelaide. Called the "Greatest Australian Woman" by Miles Franklin and by the age of 80 dubbed the "Grand Old Woman of Australia", Spence was commemorated on the Australian five-dollar note issued for the Centenary of Federation of Australia

Spence was born in Melrose, Scotland, in October 1825, as the fifth child in a family of eight. Her father David Spence was a banker and lawyer, her mother was Helen nee Brodie. Her eldest sibling, Agnes died in infancy, and her sisters were Jessie, Helen, Mary and brothers David, William and John. Spence said she had a 'happy childhood' and felt 'well brought up' with her parents being 'of one mind regarding the care of the family'. Spence had an early memory of the large funeral for Scottish Borders novelist Sir Walter Scott, in 1832. Spence's schooling from age four to thirteen, was at St. Mary's Convent School, Melrose whose head teacher was a Miss Phinn, whom Spence admired as 'a born teacher in advance of her own times'.

In 1839, following sudden financial difficulties, the family emigrated to South Australia, leaving her brother David jnr. in Scotland. Arriving on 31 October 1839 (her 14th birthday), on the Palmyra, at a time when the colony had experienced several years of drought, the contrast to her native Scotland made her "inclined to go and cut my throat". Nevertheless, the family farm endured seven months of the drought, an "encampment", growing wheat on an eighty-acre (32 ha) selection before moving to Adelaide.

Of the 'land of her adoption', Spence later wrote ' As we grew to love South Australia, we felt that we were in an expanding society, still feeling the bond to the motherland, but eager to develop a perfect society.' Unusually for a woman in those times, Spence learned about production, exchange and wealth in this early developing country, ' the value of machinery, of roads and bridges, and of ports for transport and export.' With her sisters, Spence opened a school and orphanage. She never married but did state she had refused two offers to wed.

Her brother John Brodie Spence went on to become a prominent banker and parliamentarian and her sister Jessie married Andrew Murray Hamdache.

Spence had a talent for writing and an urge to be read, so it was natural that in her teens she became attracted to journalism. Through family connections, she began with short pieces and poetry published in The South Australian. Catherine and her sisters also worked as governesses for some of the leading families in Adelaide, at the rate of sixpence an hour. For several years, Spence was the South Australian correspondent for The Argus newspaper writing under her brother's name until the coming of the telegraph.

Spence's first work, before the age of 30, was the novel Clara Morison: A Tale of South Australia During the Gold Fever. It was initially rejected but her friend John Taylor, found a publisher in J W Parker and Son and it was published in 1854. Spence received forty pounds for it, but was charged ten pounds for abridging it to fit in the publisher's standard format. It was given good reviews, and was the first novel written in Australia by a woman. At the same time Spence became employed as a journalist on The Register, but not initially with her own byline.

In 1888 she published A Week In the Future, a tour-tract of the utopia she imagined a century in the future might bring; it was one of the precursors of Edward Bellamy's 1889 Looking Backward.

Her final work, called A Last Word, was lost while still in manuscript form.

Spence was an advocate of Thomas Hare's scheme for the representation of minorities, at one stage considering this issue more pressing than that of woman suffrage. Spence campaigned for both these themes and spoke at events across Australia and to large political rallies. When Spence became vice-president of the Women's Suffrage League, she also toured and was recognised as a powerful speaker for feminism and women's suffrage in Britain and the USA, including speaking in 1893 conferences at Chicago World's Fair. She returned to find women's suffrage won in 1894 South Australia, though did not live to see this in her native Scotland, as votes for (some) women were not granted in Britain until 1918.

Spence spoke at her 80th birthday in 1905, in a way which resonates with feminist views up to this day:

'I am a new woman, and I know it. I mean I am an awakened woman.. awakened into a sense of capacity and responsibility, not merely to the family and household, but to the state: to be wise, not for her own selfish interests, but that the world may be glad that she had been born.'

Spence also travelled and lectured both at home and abroad on what she called Effective Voting that became known as Proportional Representation. She lived to see it adopted in Tasmania.

She died at her home in Queen Street, Norwood, on Sunday 3rd April 1910, at the age of 84. According to her wishes, her remains were buried in the General Cemetery, Brighton, South Australia alongside the grave of her brother J. B. Spence.

On her 80th birthday, in 1905, a public gathering was held and South Australia's chief justice, Sir Samuel James Way said that Spence was ' the most distinguished woman they had in Australia.'

There are numerous memorials to Spence around the Adelaide city centre, including:

At her birthplace in Melrose, Scotland there is also a memorial plaque to Spence, now part of the Townhouse Hotel.

The posthumous portrait of her, by Rose McPherson (later to become famous as Margaret Preston) is held by the Art Gallery of South Australia. This portrait was used as the basis of her appearance on 2001 edition of the Australian five dollar note,

In 1975 she was honoured on a postage stamp bearing her portrait issued by Australia Post.

The Catherine Helen Spence Memorial Scholarship was instituted by the South Australian Government in her honour for women aged 20-46. See separate article for a list of recipients.

Her image appears on the commemorative Centenary of Federation Australian five-dollar note issued in 2001 replacing that of the Queen.

One of the four schools at Aberfoyle Park, South Australia was named Spence in her honour. That school has since been amalgamated with another school to form Thiele Primary School.

The name of the suburb Spence in the ACT is sometimes mistakenly associated with Catherine Spence, but was actually named after the unrelated William Guthrie Spence.

All content from Kiddle encyclopedia articles (including the article images and facts) can be freely used under Attribution-ShareAlike license, unless stated otherwise. Cite this article:
Catherine Helen Spence Facts for Kids. Kiddle Encyclopedia.