The Rofft facts for kids

The Rofft had initially been the site of an Iron Age fort encompassing about 30 acres (12 ha). Suggested was the continued use of the site was due to its strategic position on a flat-top promontory providing views towards Pulford. Seventh-century Welsh sources stated that Pulford was the Welsh boundary with the Kingdom of Mercia. The Rofft fort, in addition to the other nearby small forts of Caer Alyn and Y Gaer, guarded the approach to the River Alyn valley. The Rofft fort had local administrative and judicial functions for the commote of Marford.

In 1071, William I gave the Earldom of Chester to Hugh d’Avranches that included modern day Marford. Recorded in the Domesday Book (1086) is that the Norman Lord Osbern Fitz Tesso controlled the commote of Marford and Hoseley. The reason suggested for building the motte and bailey Rofft castle was a desire to widen Norman influences into the area. The bailey was calculated to be 18 feet (5.5 m) higher than the natural ground level and protected by a dry moat. Documentary evidence about the castle is vague and disputed. Stated is that in March 1140 the castle was severely damaged, and rebuilt by Madog ap Maredudd, along with the castles at Doddington, Pulford and Wrexham. Uncertainty exists if Rofft Castle was damaged and suggested is that record may instead refer to Wrexham castle, if so, making the first confirmed written reference to the Rofft in 1161–62. 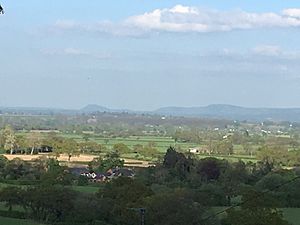 An administrative task related to the castle was the collection of Tolls at the nearby Pant Olwen. The presence of the Rofft influenced the local environment. It initially controlled the medieval Mersley Park, in a subdivision known as Horsley. Religion was focused at St. Leonards chapel, the only nearby place of worship, and under the jurisdiction of the castle.

The declining influence of the Rofft

Pratt wrote the influence of the Rofft declined due to a combination of events. The completion of the stone castles, such as Dinas Bran, Llangollen by Gruffydd Maelor II, affected the significance of the areas motte and bailey castles. Wrexham had become the centre of local trade. Changes in the local politics diluted the importance of the Rofft. In 1282, the commotes of Marford, Wrexham and Yale were combined to create the Marcher Lordship of Bromfield and Yale. The Royal Bailiffs moved from the Rofft to reside at Wrexham. In 1284, when William de Warenne received the Bromfield seisin, he chose to do so at Wrexham rather than at the Rofft. In the mid-thirteenth century, the importance of the Chapel of St. Leonard lessened due to the foundation of the All Saints' Church, Gresford. 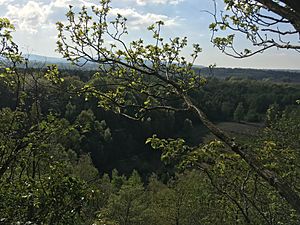 The view east into Wales, over the quarry, from near the site of The Rofft.

A 1315 survey recorded a manor house on the Rofft bailey, and by 1575, Rofft Hall covered the site of the former Iron Age hill fort. In the 1840s the construction of the railway partially destroyed the Rofft earthworks. Between 1927 and 1958, gravel quarrying obliterated the Rofft site. The Rofft survives only in name as land near the Rofft is called Castle Croft. The name of the Rofft Primary School, Marford acknowledges the site.

Mersley Park became associated with Holt, and latterly known as Holt Park, and in the seventeenth century disparked. The remaining traces of the park are within the local names of places such as Parkside and Lower Park. The Chapel of St. Leonard stood until the fifteenth century. The site of the chapel is unknown but remembered through the road name Pont-Y-Capel.

All content from Kiddle encyclopedia articles (including the article images and facts) can be freely used under Attribution-ShareAlike license, unless stated otherwise. Cite this article:
The Rofft Facts for Kids. Kiddle Encyclopedia.