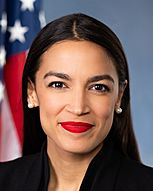 The six members of The Squad:

The Squad is the informal name for a group of four progressive women elected in the 2018 midterm elections in the United States House of Representatives. It is made up of Alexandria Ocasio-Cortez and Mondaire Jones of New York, Ilhan Omar of Minnesota, Ayanna Pressley of Massachusetts, Cori Bush of Missouri and Rashida Tlaib of Michigan. All are people of color under 50, have been supported by the Justice Democrats and are in the left wing of the Democratic Party.

The group has been said to represent the diversity of a younger political generation inspired by the Bernie Sanders's 2016 presidential campaign. Ocasio-Cortez named the group the "Squad" name in an Instagram post a week after Election Day, 2018.

During the 2020 Democratic primaries, it has been said that Jamaal Bowman, Cori Bush, and Marie Newman, all of whom won Democratic primaries after running against incumbent members of the House of Representatives, as well as Mondaire Jones, who initially challenged an incumbent and subsequently won the primary after she announced her retirement, could join the Squad in 2021.

All content from Kiddle encyclopedia articles (including the article images and facts) can be freely used under Attribution-ShareAlike license, unless stated otherwise. Cite this article:
The Squad (United States Congress) Facts for Kids. Kiddle Encyclopedia.