The Tale of Mr. Tod facts for kids

The Tale of Mr. Tod is a children's book written and illustrated by Beatrix Potter, first published by Frederick Warne & Co. in 1912. The tale is about a badger called Tommy Brock and his arch enemy Mr. Tod, a fox. Brock kidnaps the children of Benjamin Bunny and his wife Flopsy, intending to eat them, and hides them in an oven in the home of Mr. Tod. Benjamin and his cousin Peter Rabbit have followed Tommy Brock in an attempt to rescue the babies. When Mr. Tod finds Brock asleep in his bed, he determines to get him out of the house. His initial attempt fails, and the two eventually come to blows. Under cover of the fight, the rabbits rescue the baby rabbits. The tale was influenced by the Uncle Remus stories, and was set in the fields of Potter's Castle Farm. Black and white illustrations outnumber those in colour. The tale is critically considered one of Potter's "most complex and successful in plot and tone."

Potter's publisher wanted Mr. Tod to be the first in a new series of Peter Rabbit tales in larger formats with elaborate bindings, but Potter disliked the idea. Nonetheless, Mr. Tod and its 1913 follower, The Tale of Pigling Bland, were published in the new formats, but the idea was eventually dropped and the ordinary bindings were adopted for reprints. The two tales were the last completely original productions by Potter. She continued to publish sporadically but used decades-old concepts and sketches rather than new images and ideas. In 1995, an animated film adaptation of the tale was featured on the BBC television anthology series The World of Peter Rabbit and Friends. 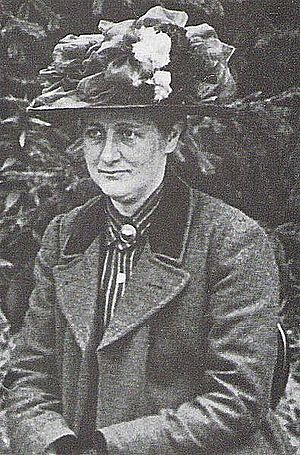 Following her acquisition of Hill Top Farm in 1905 in Lancashire (now Cumbria), Potter began her most creative and productive years as a children's author and illustrator. By the end of the decade, however, she had grown weary of writing for children. Her eyesight was failing, and the demands of operating her farm and caring for her aging parents limited the amount of time and attention she could allocate to the production of books. In 1912 however, she brought Peter Rabbit and his kin together for one last time in The Tale of Mr. Tod. She thought her editors too cautious and too concerned about offending the public, and knew she was capable of creating more complex characters and plots. In Mr. Tod she offered her fans two villainous characters – Mr. Tod and Tommy Brock, a fox and a badger. The Tale of Mr. Tod and the book to follow in 1913, The Tale of Pigling Bland, were her last completely original works. Her marriage to William Heelis in October 1913 effectively put an end to her career as a children's author and illustrator, but she continued to produce sporadically over the following years at the demand of fans and publisher, though relying upon decades-old ideas and sketches rather than new concepts and illustrations.

Influenced in part by the Uncle Remus stories, Mr. Tod is longer than Potter's earlier tales, and set in the Sawrey countryside at Bull Banks and Oatmeal Crag, two fields Potter acquired with Castle Farm in 1909. Pen and ink sketches outnumber the watercolors.

Potter's publisher Harold Warne received the text of Mr. Tod in November 1911, though Potter had written the tale some time in the past. Warne had doubts about the name 'tod' for a fox, but Potter responded:

"Tod" is surely a very common name for a fox? It is probably Saxon, it was the word in ordinary use in Scotland a few years ago, probably is still amongst the country people. In the same way "brock" or "gray" is the country name for a badger. I should call them "brocks" – both names are used in Westmoreland. "Brockholes", "Graythwaite" are examples of place names; also Broxbourne and Brockhampton [...] "Hey quoth the Tod/it's a braw bright night!/The wind's in the west/and the moon shines bright"—Mean to say you never heard that?" 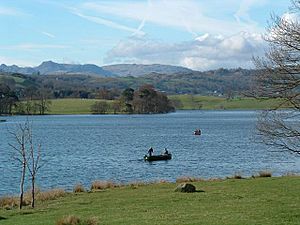 The tale is about undesirable elements of society. Warne objected to Potter's opening paragraph: "I am quite tired of making goody goody books about nice people. I will make a book about two disagreeable people, called Tommy Brock and Mr. Tod." He altered the text to read, "I have made many books about well-behaved people." Potter responded:

If it were not impertinent to lecture one's publisher—you are a great deal too much afraid of the public, for whom I have never cared one tuppenny-button. [...] I have always thought the opening paragraph distinctly good, because it gets away from "once upon a time".

She teased him about the name Bull Banks and his sensitivity to less than genteel expressions: "One thinks nothing of bulls and tups in the farming world; but after you objected to cigars it occurred to me to wonder." There were no objections, and the tale was finished in July. 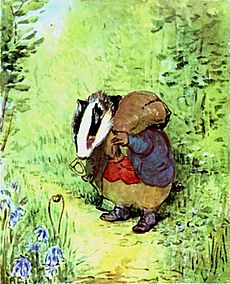 The spring of 1912 was emotionally unsettling for Potter; her father was ill and severe strikes across the country caused hardships. In April 1912, she managed to get away from London for Hill Top to execute background drawings for the tale. By July, most of the colour blocks were finished, but Potter was concerned about the anatomy of the fox, and checked photographs and reference books in the Natural History Museum in an attempt to distinguish the true English red fox (Vulpes vulpes) from other species. The book was finished by the end of July when she left for holiday at Lake Windermere. Completion of the tale had taken longer than usual because her time had been shared with participation in a campaign opposing hydroplanes on Lake Windermere and the proposed construction of an aeroplane factory near the lake.

The Tale of Mr. Tod was published by Frederick Warne & Co. in 1912, and dedicated to Francis William, the two-year-old son of her cousin Caroline (Hutton) Clark, who had married the Laird of Ulva and was living and farming on a small island off the coast of Mull: "For Francis William of Ulva – someday!"

During the course of the tale's development, Warne proposed launching Mr. Tod as the first in a new series of tales in slightly larger formats with elaborate bindings to accommodate wider spines. Potter objected. She did not want to become involved in a new series; her eyesight was failing, and she had grown weary of writing. She complained of having difficulty in producing "fresh short stories", and believed children preferred little change in the books. Nonetheless, Mr. Tod, and the next book, The Tale of Pigling Bland were published in a larger format with elaborate bindings as "Series II, New Style". Potter disliked the new endpaper depicting Samuel Whiskers sticking up a giant poster while watched by other animal characters, thinking it too like a railway advertisement. Eventually, the larger format and new designation were dropped, and the ordinary binding adopted for reprints.

The tale begins with Tommy Brock, a badger, being entertained by old Mr. Bouncer, the father of Benjamin Bunny. Mr. Bouncer has been left to tend his grandchildren while his son and daughter-in-law Flopsy are away, but, after smoking a pipe of rabbit-tobacco, he falls asleep in Tommy's company. Tommy puts the bunnies in his sack and slips out. When the parents return, Benjamin sets off in pursuit of the thief.

Benjamin finds and brings his cousin Peter Rabbit into the rescue venture, and the two discover Tommy has invaded one of Mr. Tod's homes. Mr. Tod, a fox, has multiple homes but keeps moving. Often Tommy lodges in his homes. Peeping through the bedroom window, the rabbits see Tommy asleep in Mr. Tod's bed, and, peeping through the kitchen window, they see the table set for a meal. They realise the bunnies are alive, but shut in the oven. They try to dig a tunnel into the house but hide when Mr. Tod suddenly arrives in a very bad temper, which has caused him to move house.

The fox discovers the badger asleep in his bed, and originally plans to hit him, but decides against this due to the Badger's teeth. He decides to play a trick upon him involving a pail of water balanced on the overhead tester of the bed. Brock however is awake, escapes the trick, and makes tea for himself in the kitchen. Mr. Tod thinks the bucket has killed Tommy and decides to bury him in the tunnel the rabbits have dug, thinking Tommy dug it. When Mr. Tod discovers Tommy in the Kitchen and has tea thrown over him, a violent fight erupts that continues outdoors. The two roll away down the hill still fighting. Benjamin and Peter quickly gather the bunnies, and return home in triumph. 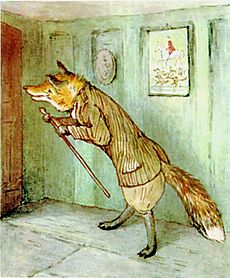 The Tale of Mr. Tod is longer than the typical Potter tale with 16 colour illustrations and a series of 42 black and white drawings, one illustration per page. The illustrations depict the wider landscape of Near Sawrey: Bull Banks, Oatmeal Crag, and Esthwaite Water. The interior of Mr. Tod's house provided the opportunity to present details of the interiors of village homes. In the frontispiece, Mr. Tod stands on a stone flag floor against a timber wall of muntin and plank construction (interlocking thick and thin vertical panels) covered with a sage-green limewash. A tea caddy, a silver salt, and blue and white willow china decorate his kitchen. The beehive-shaped brick oven was drawn from the one at the Sun Inn in Hawkshead and serves as a place for Brock to hide the bunnies. Emphatic frames in the black and white illustrations give the impression of woodcuts. Potter believed a black frame pulled a picture together and sent back the distance. Potter made the kitchen dim to eliminate some detail of the battle between Tod and Brock. 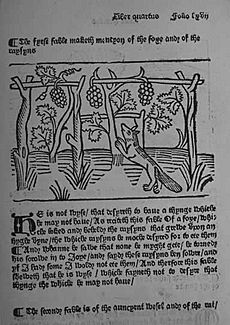 Scholar Ruth K. MacDonald argues that the black and white illustrations emphasize the mythic, permanent quality of the tale with heavy black lines that display little of the delicacy characteristic of Potter's work. She suggests these pictures are more like woodcuts in their heaviness than drawings, and points out they were not "tossed off" to satisfy fans and her publisher, but deliberately planned to give an antique, primitive quality to the story in the manner of Caxton's woodcuts for his edition of Aesop's Fables.

She notes that the colour illustrations are not vignetted nor surrounded with heavy black lines but rather with a white border that prevents the pastels from fading into the background. The lightness of the pastels and the overall green tones of the colour illustrations contrast with the heavy lines of the black and white pictures and the blocks of print, and this contrast produces a sense of fading because of antiquity yet suggest permanence, "as the greenness of nature is permanent and recurring in the cycle of seasons."

All content from Kiddle encyclopedia articles (including the article images and facts) can be freely used under Attribution-ShareAlike license, unless stated otherwise. Cite this article:
The Tale of Mr. Tod Facts for Kids. Kiddle Encyclopedia.