The Tiger, the Brahmin and the Jackal facts for kids 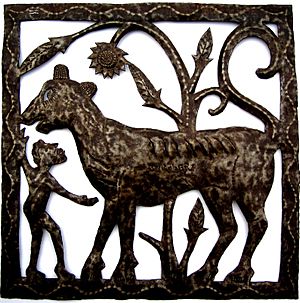 an illustration of a variant of the tale

A brahmin passes a tiger in a trap. The tiger pleads for his release, promising not to eat the brahmin. The brahmin sets him free but no sooner is the tiger out of the cage then he says he is going to eat the brahmin, going back on his promise. The brahmin is horrified and tells the tiger how unjust he is. They agree to ask the first three things they encounter to judge between them. The first thing they encounter is a tree, who, having suffered at the hands of humans, answers that the tiger should eat the brahmin. Next a buffalo, exploited and mistreated by humans, agrees it is only just that the brahmin should be eaten. Finally they meet a jackal who, sympathetic to the brahmin's plight, at first feigns incomprehension of what has happened and asks to see the trap. Once there he claims he still doesn't understand. The tiger gets back in the trap to demonstrate and the jackal quickly shuts him in, suggesting to the brahmin that they leave matters thus.

an illustration by John D. Batten for 1912 book by Joseph Jacobs.

There are more than a hundred versions of this tale spread across the world. In some the released animal is a crocodile, in some a snake, a tiger and others a wolf.

Folklorist Joseph Jacobs stated that the tale can be found in early Indian sources. Some variants are very old, going back at least to the Panchatantra or Fables of Bidpai and the Jataka tales. In Europe it appeared some 900 years ago in the Disciplina Clericalis of Petrus Alphonsi, and later in the Gesta Romanorum and the Directorium Vitae Humanae of John of Capua.

There are also modern illustrated versions of the tale, such as The Tiger, the Brahmin & the Jackal illustrated by David Kennett and The Tiger and the Brahmin illustrated by Kurt Vargo. Rabbit Ears Productions produced a video version of the last book, narrated by Ben Kingsley, with music by Ravi Shankar. The variant by Rabbit Ears Productions alters certain bits of the story, where the Brahmin travels alone to gain the opinion of others. An elephant is included as first of the three things (the latter two being the tree and water buffalo) that the Brahmin encounters.

All content from Kiddle encyclopedia articles (including the article images and facts) can be freely used under Attribution-ShareAlike license, unless stated otherwise. Cite this article:
The Tiger, the Brahmin and the Jackal Facts for Kids. Kiddle Encyclopedia.