Thelymitra epipactoides, commonly called the metallic sun orchid, is a species of orchid that is endemic to south-eastern continental Australia. It has a single relatively large, leathery leaf and up to twenty large flowers that range in colour from pink to reddish but have a distinctive arrangement of lobes above the anther. 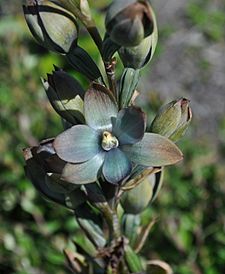 Flowering occurs from September to November. The flowers are insect pollinated and open on warm days.

Thelymitra epipactoides was first formally described in 1866 by Ferdinand von Mueller in Fragmenta phytographiae Australiae from a specimen collected near Port Phillip. The specific epithet (epipactoides) is derived from the name of the orchid genus Epipactis with the Latin suffix -oides meaning "likeness".

The metallic sun orchid grows in grassland, heath and forest in southern Victoria and in the Murraylands, Eyre Peninsula and south-east corner of South Australia.

Thelymitra epipactoides is listed as "endangered" under the Victorian Government Flora and Fauna Guarantee Act 1988 and the Australian Government Environment Protection and Biodiversity Conservation Act 1999. The main threats to the species are inappropriate fire regimes, weed invasion and grazing by rabbits.

All content from Kiddle encyclopedia articles (including the article images and facts) can be freely used under Attribution-ShareAlike license, unless stated otherwise. Cite this article:
Thelymitra epipactoides Facts for Kids. Kiddle Encyclopedia.